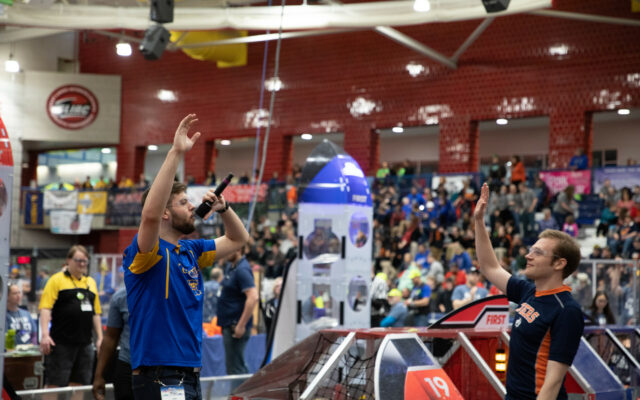 Saginaw Valley State University is hosting 160 high school robotics teams from across the state for the FIRST in Michigan state championships. The annual robotics event is expected to draw about 5,000 high school students and 8,000 total visitors to campus each day of the competition, which starts Thursday, April 14 and runs through Saturday, April 16.

The Great Lakes Bay Regional Convention and Visitors Bureau has estimated economic impact of at least $1 million for previous events. This is the fourth year SVSU has hosted the state competition. SVSU faculty, staff and students volunteer their time to support local schools and education programs, and more than 300 individuals – faculty, staff, students and alumni – have volunteered during previous championships on campus.

Teams will arrive and set up their “pits” to work on their robots Wednesday. Teams compete in qualifying district events, with the winners determined by a point system. The 160 top-ranked teams advance to the state championship. Winners from the state level competition at SVSU will advance to the FIRST championship in Houston.

The theme for the 2022 FIRST Robotics competition is “RAPID REACTSM,” sponsored by Boeing. In the game, teams compete to score “cargo” balls into upper and lower hubs. As a final challenge, the robots traverse the rungs of their hangar.

The anticipated daily schedule is as follows:

Wednesday, April 13: Teams will begin arriving to unload their robots and set up their pits (workspaces for making adjustments to the robots) around 2 p.m. and may work on their robots in the SVSU Fieldhouse until 9 p.m.

Thursday, April 14: Practice matches will be held in the O’Neill Arena of SVSU’s Ryder Center from 8:30 a.m. to noon. Opening ceremonies will begin at 1 p.m., and competition matches will run from 1:30 to 7:30 p.m.

Friday, April 15: Matches are scheduled from 9:30 a.m. to 6 p.m. Teams that qualified for the playoffs will form alliances that evening to prepare to compete on Saturday.

Saturday, April 16: Opening ceremonies will be held at 9 a.m. Playoff matches are scheduled from 9:30 a.m. to 12:30 p.m. The teams that qualify for the finals will calibrate their robots at 2 p.m., and the final playoff rounds will begin at 2:30 p.m. The awards presentations will follow, staring sometime after 4 p.m.

“Being able to communicate with people at various levels was essential with FIRST,” she said. “Using fancy language to show off how much you knew didn’t benefit anyone–just like in education. Being able to use language with my students that they will understand is essential for them to learn.”

“The skill of time management is something all FIRST Robotics students know,” Olesen added. “Only having six weeks to prepare for a competition is not a lot of time, but we made it work every year. Preparing lessons and making sure those lessons are the appropriate time length is vital for teaching. I don’t get more time than my allotted class time, so time management is huge.”

The FIRST organization is aimed at inspiring young people to be leaders and innovators in science and technology. It has a goal of establishing a sustainable robotics competition team at every high school in the state.

For up-to-date information on the competition, visit:      https://www.svsu.edu/firstatsvsu/