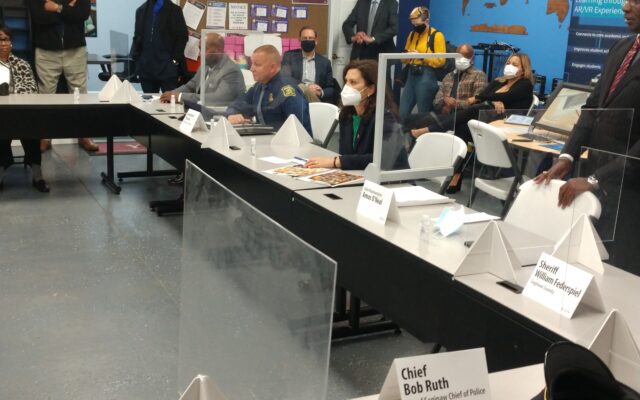 Gov. Whitmer speaks with local law enforcement and community leaders during a public safety round table in Saginaw. (photo by Mike Percha)

In August, the governor unveiled the plan, which provides a boost in funding for law enforcement across the state. Using American Rescue Plan Act funds, $32 million would go to recruiting, training and retaining police officers, with another $6.35 million being used to focus on getting illegal guns off the streets.

Police leaders like Saginaw Police Chief Bob Ruth thanked the governor for the plan, saying the number one issue many departments are facing is a lack of funds. He also mentioned retaining officers is a high priority, as once new recruits get some experience in cities like Saginaw, they’re often recruited by outlying departments looking for that experience, often leaving the previous departments in a lurch.

Both Ruth and Buena Vista Township Police Chief Reggie Williams say the perspective on police officers also needs to change. “It’s not cool to be a cop,” according to Ruth. Williams says there needs to be a conversation on making law enforcement an attractive career option.

“A lot of the enhancements that we’ve done have made a step, but I’d like to keep walking that path so that we can draw good, talented people into law enforcement, because that’s crucial to keeping communities safe.”

As crime increases in many communities across the state and the country due to pandemic related stressors, Saginaw area law enforcement are getting kudos from the Governor. Saginaw has a history of different agencies working together to help keep crime down, which the governor acknowledged.