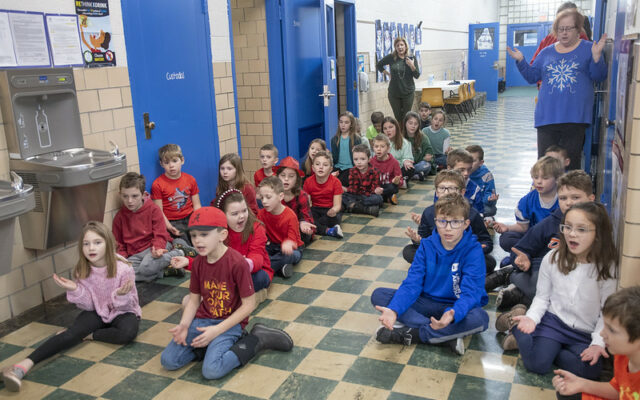 Catholic Schools Week at St. Joseph the Worker in Beal City: Students attend a prayer service to give thanks to God for the privilege of Catholic education. Photo by Jeff Schrier

The Diocese of Saginaw has announced what it’s calling “a new chapter in Catholic school education,” with the launch of  an effort called “Our Catholic Schools: Centered in Christ, Committed to Excellence,” which it said is a dedicated effort to strengthen and grow Catholic schools in the diocese.

“I’m excited about this,” said Bishop Robert Gruss, who announced Catholic schools as one of his priorities in December 2021. Bishop Gruss is expanding the diocesan Office of Catholic schools, creating two new positions, that will provide resources and direct support to the effort across the diocese in the areas of Catholic identity and curriculum, as well as marketing and enrollment.

“Our Catholic Schools instill Catholic values and principles in our children. They foster the fullness of our Catholic identity and form our children for life,”  said Bishop Gruss.

School officials have already been working on the effort.

“We began by reviewing current operations of our schools, based on the 13 standards and over 70 benchmarks that make up the National Standards and Benchmarks for Effective Catholic Elementary and Secondary Schools (NSBECS),” said Superintendent of Catholic Schools Cormac Lynn.

Schools were evaluated to both recognize strengths and identify opportunities, and conversations were had to learn from Catholic schools that are thriving.

“If we want our Catholic schools to thrive and serve our communities for generations to come, we need to make some systematic changes to how we operate,” Superintendent Lynn said. “We also have an obligation to make sure that we are providing great formation and value to those families that sacrifice to send their kids to Catholic schools and for parishes that support Catholic schools.”

The Diocese had made commitments in the several key areas: mission and Catholic identity, academic excellence, leadership, governance and operational vitality.

“Our Church, our culture, and our world need living models of faith today, disciples who are formed with the mind and heart of Christ, who are educated and well-rounded in our Catholic faith tradition,” Bishop Gruss said.

The Diocese has plans to appoint a formal council to support the Office of Catholic schools and to work in collaboration with the existing school boards and committees. One significant role of the council will be in the area of retaining and recruiting effective teachers, administrators, and school staff.