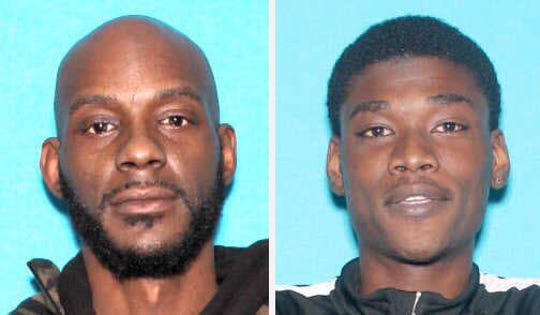 Two Flint men are on the run after allegedly killing a security guard and the U.S. Marshal’s Service in Detroit is offering a reward for information leading to their arrest.

44-year-old Larry Teague and his son, 23-year-old Ramonyea Bishop are accused of killing 43-year-old Calvin Munerlyn, who was working Friday, May 1 at the Family Dollar on Fifth Ave. Police say Munerlyn was in an argument with Teague’s wife, 45-year-old Sharmel Teague, when he wouldn’t let the woman’s daughter into the store without a face mask. Sharmel allegedly contacted the two men, who arrived at the store shortly afterwards. Police say Bishop is responsible for shooting Munerlyn.

The Marshal’s Service is offering $2,500 each for the suspects. Anyone with information can call the US Marshal’s tip line at (866) 865-TIPS, send a message to usmarshals.gov/tips or send a text to (800) SPEAK-UP.