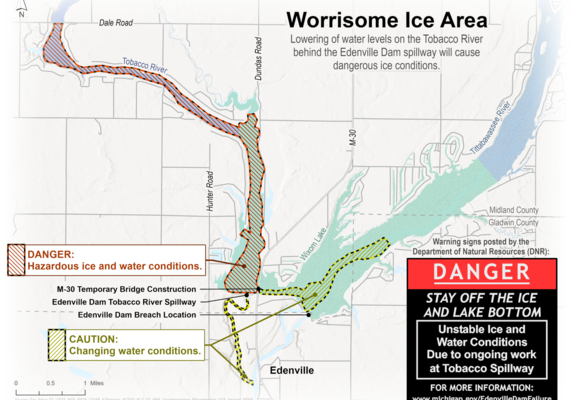 The Midland County Office of Emergency Management is urging residents to stay off the Tittabawwassee River as work crews begin lowering the Tobacco River spillway at the Edenville Dam on Wednesday, February 24th. As the flow of water changes, dangerous and unstable ice conditions will develop and pose a significant risk for recreational users above and below the dam. Water levels behind the dam are expected to drop about 12 feet by the second week of March. The public is warned to stay off the ice and the newly exposed bottomlands until further notice.

As water flow is slowly returned to the spillway, there will be an increase of water levels and current speed downstream of the dam, through Edenville, Sanford Lake, Sanford Dam and the City of Midland. The fluctuating river level will impact the stability of both ice and open water and make it unsafe for residents to ice fish, walk, or recreate on the river. The Village of Sanford will be closing access to the Village Park and not allowing access to the River until further notice. The Midland County Parks will be closing access to the River from their property around the Rail Trail in Sanford. The City of Midland will close the Caldwell and Golfside Drive boat launches.

In the event of a structural collapse causing an uncontrolled release of water, Midland County Emergency Management will enact existing emergency plans and utilize emergency notifications systems currently in place for flash flooding. Flash flooding would impact those along the Tobacco River between the Dam and Curtis Rd Bridge. Additional impacts will include the rise of the River in the Sanford Lake area (not beyond the lake bottoms), at the Sanford Dam and downstream into the City of Midland causing damage to ice and flooding of open water. The river is not expected to overflow its banks south of Sanford.

Lowering the spillway is an integral part of the emergency dam work that was started in December to alleviate concerns over the possibility of a future flood that could send a 10-15-foot wave of water downstream should the dam fail a second time. Work is also being done to restore the Tobacco and Tittabawassee Rivers to their natural channels and clear debris and sediment to help protect area residents and businesses.