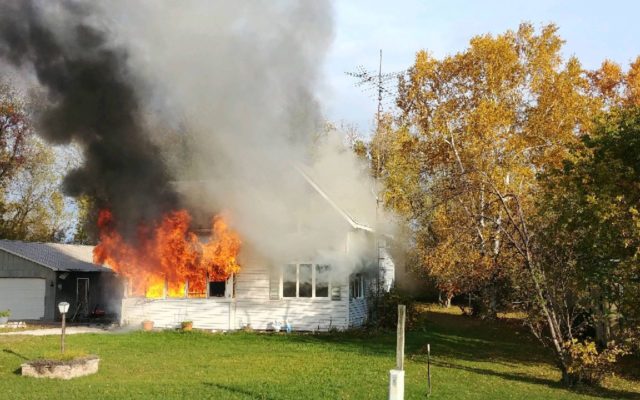 A 35-year-old man is facing felony arson and other possible charges after an incident in Huron County Tuesday morning. Sheriff Kelly Hanson said the man’s 29-year-old girlfriend called police about 9:30 a.m., saying her boyfriend was suicidal and attempting to set their house on fire. She had also been burned on her hands and leg.

Flames were coming from the house, on W. Filion Road in Meade Township, when deputies arrived, and the man had fled. The deputies and law enforcement personnel from several other agencies tracked down the suspect about two hours later, about a half mile away.  Other personnel assisting the Huron County Sheriff Dept. included a Conservation Officer, Kinde Fire, Bad Axe Fire, Oliver Township Fire and Huron Central Ambulance.

The suspect was being held in the Huron County Jail on a $100,000 bond, pending arraignment. The woman was treated for burns at the scene, but declined hospital treatment.

Firefighters battled the house fire for more than two hours. The house, which the couple was renting, was heavily damaged and may be a total loss, according to Sheriff Hanson. The incident is still under investigation.