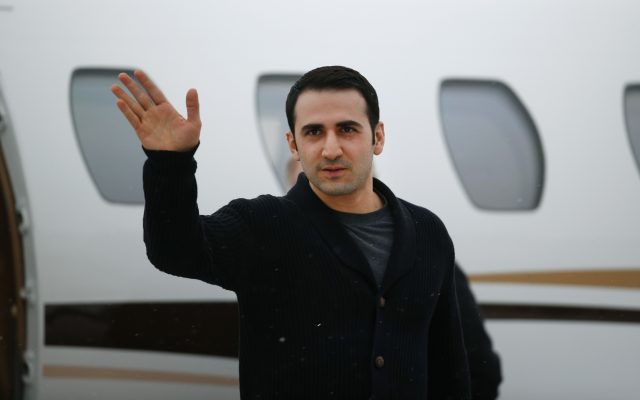 FILE - In this Jan. 21, 2016, file photo, Amir Hekmati waves after arriving on a private flight at Bishop International Airport in Flint, Mich. A former U.S. Marine freed from Iranian custody five years ago is in court with the American government over whether he can collect a multimillion-dollar payment from a special fund for victims of international terrorism. Newly filed court documents show that the FBI opened an investigation into Hekmati, on suspicions that he went to Iran to sell classified information to the regime. He vigorously disputes those allegations. (AP Photo/Paul Sancya, File)

A former Marine, University of Michigan graduate and son of Iraqi immigrants is in a dispute with the Federal Government over whether he can collect millions from a fund for international terrorism victims. Hekmati, who grew up in Flint, was  held in an Iranian prison for four years and tortured, making him eligible for the payout. But an FBI investigation contends he went to Iran to sell classified information.

Hekmati, who was born in Arizona, had previously worked as a Department of Defense contractor. He contends he went to Iran to meet his grandmother and other family members for the first time, when the Iranian government imprisoned him on suspicion of spying. He was released five years ago.  The U.S. Justice Department has never charged Hekmati.  His lawyers say the accusations are unfounded.