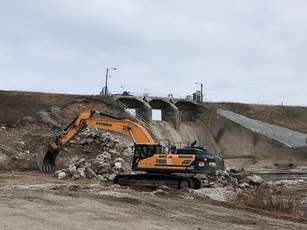 Near the Edenville Dam, while crews were constructing a gravel access drive for access to the dam for work on the spillway. (source: EGLE)

The Michigan Dept. of Environment, Great Lakes and Energy (EGLE) has announced that emergency construction work started this week at the remaining portion of the Edenville Dam and along the Tobacco River in Gladwin and Midland counties to protect residents, infrastructure and natural resources from future flooding events downstream of the failed dam.

EGLE said area residents will notice heavy equipment from Fisher Contracting Co. performing excavation work below the dam, while other crews will be working inside the Tobacco River spillway to prepare it for being lowered by 21 feet, which will result in a drop in water levels of up to 13 feet. Lowering the spillway crest will alleviate concerns about the stability of the remaining dam embankment, restore natural river flow to the Tobacco River, reverse negative impacts on natural resources and seek to avoid another major flooding event when winter snow melts and spring rainstorms arrive.

Fisher Contracting expects to have a crew of approximately 15 working six days a week for the next 2 1/2 months to complete the project, using equipment that includes a 100-ton crane, a 50-ton excavator and a 30-ton excavator on a barge, a bulldozer and 40-ton off-road trucks.

The $2.3 million contract for the time-sensitive work was approved by the EGLE and the Michigan Department of Transportation (MDOT) after Boyce Hydro Power LLC, the dam’s owner, refused in September to undertake the critically needed safety measures. Federal funding through the U.S. Department of Agriculture’s Natural Resources Conservation Service is paying 75 percent of the cost while 25 percent will come from funds allocated by the legislature for dam work.

EGLE and MDOT hired the AECOM engineering firm in October to design the best solution that can be completed on a short timeframe by late winter. The Edenville Dam is still classified as a High Hazard Dam, which means that another collapse could result in severe downstream flooding impacts and even a loss of life.

In conjunction with the emergency work on the dam and downstream river channel, MDOT will begin construction of a temporary M-30 causeway bridge to replace the one destroyed by the flood. Without the emergency corrective work to the dam, MDOT would not be able to safely build the temporary bridge due to continuously changing river dynamics.

EGLE issued on Nov. 19 an emergency conditional permit for the dam work. The permit allows for lowering of the Tobacco River spillway, grading and stabilization of the dam and river channels, removal of fill and sediment and redirecting the Tittabawassee River flow away from the dam’s breach.

Some project work that is not time-sensitive will be performed in the spring and summer of 2021 and further work beyond the scope of this project may need to be performed at a later date. The emergency work plan is intended to protect the public and natural resources in the near future and is independent of any long-term decisions that will be made by the dam’s owner and local stakeholders on the future of the failed Edenville and Sanford dams.

EGLE hosted a public webinar on Nov. 13 to explain details of the Edenville Dam stabilization project.

The emergency work continues efforts by EGLE and other state departments to help the mid-Michigan region recover from May’s devastating floods.

EGLE has worked closely in consultation with local emergency managers and municipal officials, issued permits for rebuilding and erosion control, advised on debris removal, monitored surface water for hazardous waste contamination and assessed impacts on natural resources and aquatic species. Gov. Gretchen Whitmer’s disaster declarations have been approved by the federal government, allowing for Federal Emergency Management Administration recovery funding for resident and business reconstruction. MDOT has removed debris and rebuilt a number of key bridges and roads that were damaged or destroyed by the floodwaters. The Department of Natural Resources (DNR) worked with EGLE to rescue stranded mussels and fish, and later documented the extent of mortality of these species. The DNR also worked with EGLE to assess erosion and instability caused by the dam break.

An independent forensic investigation funded by the Federal Energy Regulatory Commission is continuing its work and will also be at the Edenville Dam to assess the structure. A report on its findings, which will be made public, is not expected until late next year. The Michigan Dam Safety Task Force continues its discussion of recommendations it will make to Gov. Whitmer and the Legislature regarding policies and procedures regarding dam safety throughout the state. The Task Force’s report is expected early in 2021.

Information related to the dam breach and flooding event as well as a timeline of the emergency work can be found at the Edenville Dam failure webpage.