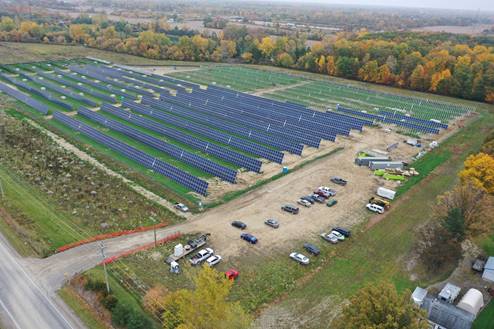 Consumers Energy, Pine Gate Renewables and Kayne Anderson Capital Advisors have announced that three new solar energy projects in Saginaw County and five in Genesee County are now online. The eight sites were built and are operated by Pine Gate Renewables and are owned by Kayne Anderson. Consumers Energy has 20-year agreements to purchase the energy from the projects. Each solar farm has a 2-megawatt capacity. Combined, the solar farms produce up to 16 megawatts, adding to Consumers Energy’s 10-megawatts of solar energy capacity previously available to serve its customers.

The names of the local solar projects that began operations in the last five weeks are Geddes 1 Solar, Geddes 2 Solar and Stoneheart Solar in Saginaw County, and Captain Solar, Interchange Solar, Jack Francis Solar, May Shannon Solar and Coldwater Solar in Genesee County.

“These solar plants coming online are a testament to our commitment to solar energy in Michigan as a major component of the Clean Energy Plan, our blueprint for a coal-free and carbon-neutral future,” said Tim Sparks, vice president of electric grid integration at Consumers
Energy. “We thank Pine Gate Renewables for shared beliefs in protecting our planet and for their expertise building the vital clean energy infrastructure.”

“Becoming a leader in solar energy has been an important focus of Kayne Anderson over the last several years,” said Jon Levinson, co-head of renewables at Kayne Anderson Capital Advisors. “We are very pleased to have brought this initial wave of projects to completion in Michigan, and we are very excited about the continued build-out of our solar footprint over the next several years.”

Consumers said the initial eight projects include more than 50,000 solar panels and have employed about 240 local workers through construction.