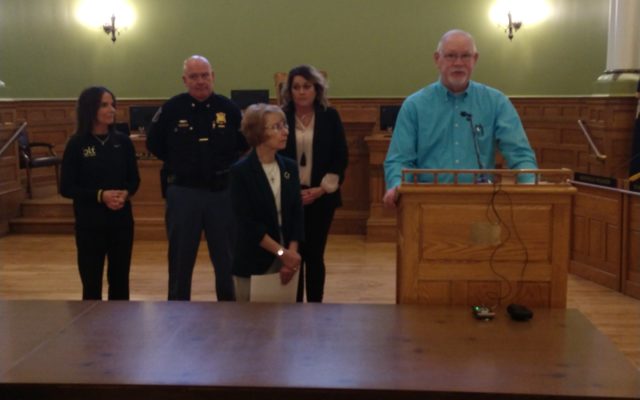 Parade and Bay City officials hold a news conference announcing the canellation of the By City St. Patrick's Day parade and races (photo by Michael Percha)

Fears over the coronavirus have prompted the cancellation of the Bay City Saint Patrick’s Day parade and races this weekend.

An estimated 60,000 people were expected to attend the parade this year, with another 7,000 to run the races. However, parade and race organizers are taking the advice of state and local health officials who say gatherings of more than 100 people increase the spread of the virus. Two cases of coronavirus were confirmed in Wayne and Oakland counties this week, the first two to be officially recognized in Michigan.

Saint Patrick’s Day Parade president Tom Newsham says the decision to cancel wasn’t easy, but they were following the advice of state and local health officials after to cases of CORVID 19 were confirmed in Michigan. He says despite the disappointment, people are supporting the decision.

City Manager Dana Muscott says while a dollar amount can’t be guessed at this time, the loss of the event to the local economy is significant, though she says there will still be people who come to the city for the holiday, so it isn’t as if those businesses will be completely empty. Muscott encourages Bay City residents to also go out on Sunday and support a local business.

Entrants for both the parade and the races paid non-refundable fees for the events. Vice President Community Affairs for Jolt Credit Union, the race’s premiere sponsor, Bridget Staffileno says though there won’t be a refund, anyone who paid a registration fee will still receive their t-shirt and medal. She says the money also goes back into the community, often through no-profit organizations.

Newsham say while parade entrants also paid a non-refundable fee, the parade board is considering other options to possibly revise that policy based on the circumstance.