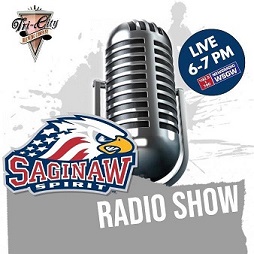 Live from Tri-City Brewing Company, 4170 Shrestha Drive in Bay City, from 6-7pm (across from the Bay County Civic Arena)

Join the Voice of Saginaw Spirit Hockey, Joey Battaino, and WSGW’s Art Lewis, along with coaches, players, and more

Charlie and Dave and Pat and YOU:     We defend our Detroit Lions against the NFL investigating the team for a possible protocol violation regarding Matthew Stafford and his injury (runs 6:02)…..

Charlie and Dave and Pat and Art and YOU:    We talked about the Chicago library system eliminating overdue fines earlier in the show, and then we received an update on the story (full story below) and included the update before the end of the show (runs 4:24)…..

CHICAGO (AP) — Chicago public libraries have seen a 240% increase in the number of books returned since the city’s mayor eliminated overdue fines, according to a library official.

Library Commissioner Andrea Telli testified at a budget hearing Wednesday, telling City Council members that abandoning the library fines policy has been instrumental in luring in both patrons and books.

“Just by word of mouth and also on the library’s social media pages like Facebook, we saw a lot of patrons say, ‘Oh my God. This is so great. I’m gonna bring back my books. I’ve been hesitant to come back to the library because I owe these fines,’” Telli said.

Lightfoot is also making an effort to open libraries on Sundays. The mayor’s 2020 budget includes an $18 million property tax increase to honor her promise to establish Sunday hours at Chicago’s 81 libraries. Currently, the Harold Washington central library and three regional libraries are open 1 p.m. to 5 p.m. on Sundays.

During Wednesday’s hearing, Telli noted that 15 to 20 branches will open Sundays in the first quarter of 2020, while more branches will follow gradually throughout next year.

“We don’t want them all to open first on the North Side or the South Side,” Telli said. “We want them spread around the city as they open.”

WSGW Home for the Holidays

Setzer says he’s heartbroken to disappoint fans who have shared his Christmas seasons for more than 15 years.    The tour was
supposed to begin Friday in Minneapolis.

CHINCOTEAGUE, Va. (AP) – A gourmet grocery store on Virginia’s Eastern Shore is selling a bottle of beer that costs $230. It’s also so full of alcohol that it’s illegal in more than a dozen states.

The Daily Times of Salisbury, Maryland, reported Monday that Poseidon’s Pantry in Chincoteague is selling a rare and much-coveted beer that’s made by Sam Adams.

The barrel-aged beer is called Utopias 2019.   The custom-made bottle holds 25.4 ounces.   The alcohol content is 28 percent, which is too much to be sold in 15 states.

Shop co-owner Sarah Mason said the purchase was “kind of an impulse buy“ for a store that’s known to sell rare beers.   She added that the beer “is a whole other level.“   Sam Adams recommends drinking an ounce of the beer at a time.

A week removed from election day and an election oddity story…..

REEVESVILLE, S.C. (AP) — The ballot for the mayoral race in a small South Carolina town was blank Tuesday, leaving voters to write in whoever they wanted.

The Post and Courier reports Paul Wimberly didn’t know he’d been reelected as the Reevesville mayor until he spoke with a reporter the next morning. Wimberly has been Reevesville’s mayor for 34 years, but missed the election registration deadline this year when Dorchester County was put in charge of the race.

The hopeful contenders on the Town Council also missed the deadline, meaning the race had no official candidates. Wimberly said he wasn’t too worried, as the 1.6-square-mile (4.1-sq. kilometer) town of about 196 people knows his face and name. So he’s now back in the $300-per-year leadership role for the town, which relies mostly on volunteer positions.

The WSGW “Food For Families” Campaign is Underway…..