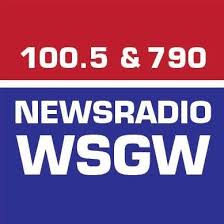 Good luck Charlie and the boys!

Major league hitters have already hit more home runs this season than during the entire 2014 season.

However, the Detroit Tigers are doing their best to prevent this from happening. As Chris Nelson from The Detroit Free Press reports:

Entering Wednesday, the Tigers were tied for the worst team batting average in baseball at .233 and scored the fewest runs in the majors at 352. Their on-base-plus-slugging percentage of .676 and 89 home runs were second-worst.

With the Robert Mueller testimony behind us, don’t forget to vote in our poll on whether or not his testimony changed your opinion.

Listen as Dave and Pat talk about Charlie’s baseball trip, and the Mueller testimony and poll.

Come on out and try your luck with Closest to the Pin!

Take three swings at the pin… your first shot is the “Hole-In-One” shot – sponsored by Ryan Busman of Combined Insurance of Saginaw… and at the end of the WSGW Morning Team Show at 9am, the golfer Closest to the Pin, wins an invitation (along with a guest), on our WinVitational Golf Outing on September 10 to Treetops, including dinner after at Forward Conference Center in West Branch.

The next contest is Tuesday, July 30, at Green Acres Golf Course in Bridgeport from 6:30am-9am!

Plus, sign up your 2-person team for the 2019 Triton Legal & WSGW Winvitational 2 Person, Best Ball Golf Tournament. 18 holes at Sawmill Golf Club in Saginaw. 9 am “shotgun start”. A hot dog lunch will be served at the turn and a BBQ feast during the awards presentation.

The WSGW Winvitational takes place on August 20th at The Sawmill Golf Club!

Pat shared the story about former Detroit Tigers’ pitcher Donald Mossi, who died at the age of 90.

Mossi pitched in a pivitol Tigers-Yankees game in 1961 where the Tigers dropped a tough 1-0 decision. But Mossi shutdown Roger Marris and Mickey Mantle that day. Marris and Mantle were battling each other for the home run record.