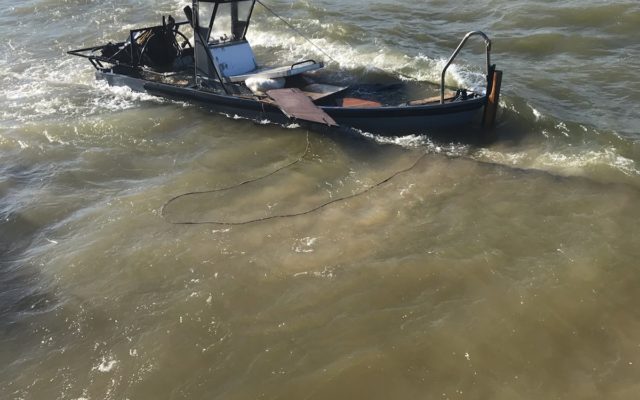 Huron County Sheriff’s Deputies responded to the 8900 block of Crescent Beach Road in Caseville Township around 5:00 Sunday afternoon on a report of a distressed boat between 500 and 1,000 feet offshore in Saginaw Bay. While deputies waited for their 28 foot boat to be brought out from Bad Axe, a tow boat arrived at the distressed boat location but the tow boat was swamped by the 4-5 foot waves rendering it disabled. The tow boat drifted toward shore and was destroyed as it was beaten against a steel seawall by the rough waters. The tow boat operators escaped without injury and told deputies a second tow boat was on its way. The second tow boat and the sheriff’s patrol boat were on the scene around 7:30 and escorted the distressed boat to safety. Once on shore the occupants had a hard time walking and were assisted by Scheurer Ambulance personnel, but declined to go to a hospital. The 54 year old boat owner from Caro told Deputies they had

begun their boat trip earlier in the day with much calmer wind and waves, but their 22-foot wooden Chris-Craft boat became disabled and the wind increased along with a significant drop in temperature.

Huron County Sheriff Kelly Hanson said early season boaters are advised that emergency on-water services are very limited in that area this time of year. Hanson said always have a backup plan in place, consider your vessels capabilities and mechanical condition, as well as make sure there’s proper safety equipment and appropriate weather gear aboard.