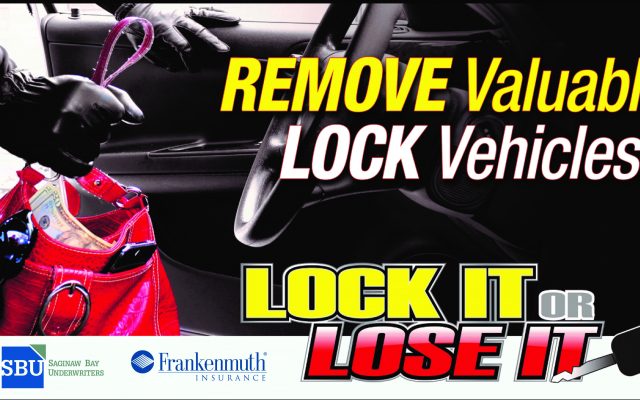 The Saginaw Township Police Department, alongside Frankenmuth Insurance and Saginaw Bay Underwriters, has kicked off the 10th annual summertime “Lock-It or Lose-It” Program.

Designed to educate citizens, the campaign was started to help combat the prevalent summertime crime of larceny from Vehicles.

Saginaw township crime prevention officer Chris Fredenburg says since the beginning of Lock-It or Lose-It in 2011, the number of thefts from vehicles has nearly been cut in half from 220 average cases per year from 2001 to 2010, to 122 average cases from 2011 to 2021.

He says residents should remove valuables (like money, electronics, pharmaceuticals, firearms, etc.) from their vehicles, make sure the vehicle is locked when not in use, and call 911 to report any suspicious activity in their area; but adds the easiest way to prevent theft is to simply lock your car door when not in use.

Sagnaw Township Police Chief Don Pussehl says because of its success in making communities safer,  Lock-It or Lose-It has become a model for other departments across Michigan.