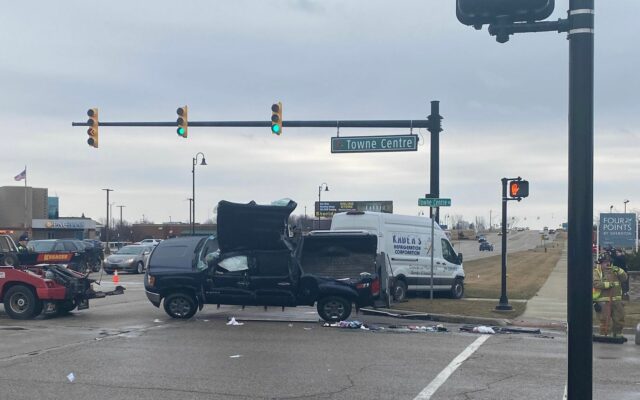 Responders needed to cut open the roof of the crashed GMC Sierra like a tin can in order to remove the Rose City couple inside. (Photo- Ric Antonio; WSGW)

A crash at the intersection of Tittabawassee and Towne Center roads in Saginaw township sent a couple from Rose City to the hospital.

Bystanders and first responders say around 10:30am this morning a GMC Sierra was traveling west on Tittabawassee around 70mph trying to beat a yellow turn signal into the taco bell driveway.

From there; they say the truck lost control, ramming into a refrigerated van that was turning on a green light in the other direction.

The truck roof was removed by fire crews and the two inside were extracted with non-life threatening injuries after landing on the front end of a BMW- which prevented the vehicle from landing completely on its top.