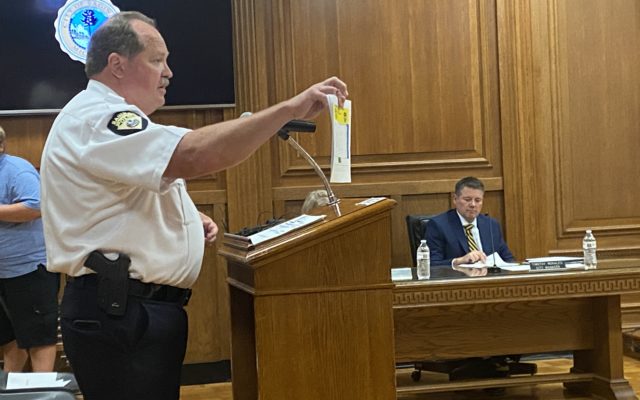 Saginaw Police Chief Bob Ruth says staffing has been a challenge for the Department not just following the pandemic- but for the last 10 years.

The timeline follows approximately when a number of GM facilities stopped operating in Saginaw, causing a drop in tax revenue being used to fund the department, as well as when Ruth had taken over as Interim Chief.

He says the department was handling that number of calls with approximately 48 officers, compared to 155 officer twenty years ago.

At the time of the Committee meeting- Ruth said the department is working towards a total of 60 officers, with some currently injured and others in field-training or being put through the police academy.

He says the department will be adding 3 more officers ahead of a resignation and three retirements coming over the course of next year.

Of statistics shared at the meeting, he included since arrests made two weeks ago during a police-involved shooting, the city has kept relatively quiet: reporting only 2 shootings both of which were self-inflicted.

On the matter of communication with Saginaw police, residents have been asked to communicate with them more to cut crime- but some residents  say the police haven’t been returning the favor.

Tiffany Owens says prior to this week’s Committee of the Whole meeting, She had not been contacted by police or any city officials regarding the shooting of her 26 year old daughter, Tamarea Shenille Steward, who was killed on July 31st at a large party on Lynwood Avenue that left several others critically injured or dead.

When questioned on the matter; Ruth says the idea that someone from the Victim Services department has not contacted her in nearly three and a half weeks is false, and that he knows she had specifically been spoken with after her contact information had been confirmed with the department last week.

Owens says the miscommunication is unacceptable, and that her daughter is the second child of hers to die in a Saginaw shooting, after a 2012 drive-by killed her 12 year old Tamaris Steward Jr.