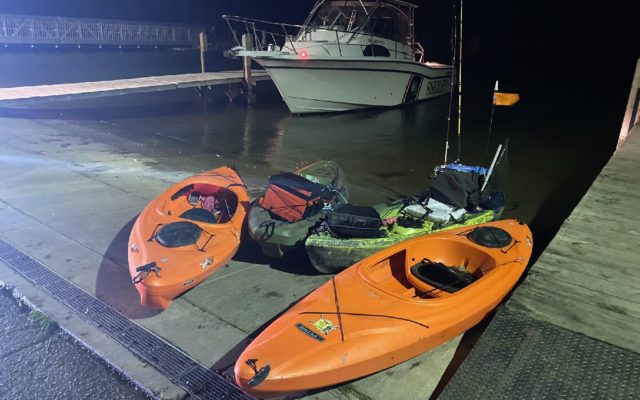 Two rough water rescues were performed by Huron County Marine Deputies Sunday.
The Huron County Sheriff’s Office had to rescue nine people in two separate water incidents.
The first incident happened about 4 p.m. Deputies were dispatched to Saginaw Bay west of Sleeper State Park to rescue four men on an inflatable dingy. The dingy was under-inflated and was quickly being blown offshore by gusty southerly winds. They had a broken paddle.
Huron County Sheriff Kelly Hanson said the four Detroit men were located more than two and a half miles offshore in three to four-foot waves. The men were taken aboard the patrol boat and taken to shore.

The second incident happened about 9 p.m. Five kayakers had left Turnip Rock in the dark after taking sunset pictures and were heading into southerly winds gusting more than 35 miles an hour,
Deputies were able to locate the kayakers about 10:15 p.m. north of the Port Austin breakwall.
The family of five, from Taylor, included a 6-year-old, a 10-year-old, and a 14-year-old. Hanson said the children and parents were all on tied together kayaks trying to make it in.
Sheriff Hanson said “The younger children were very cold, as everyone was dressed in swim gear and tired. A one person kayak was even occupied by a parent and child. Fortunately all had life jackets.” The family was taken aboard a patrol boat and returned to shore.
The sheriff’s office will confer with the prosecutor’s office to discuss charges such as operating an unlighted watercraft after dark.