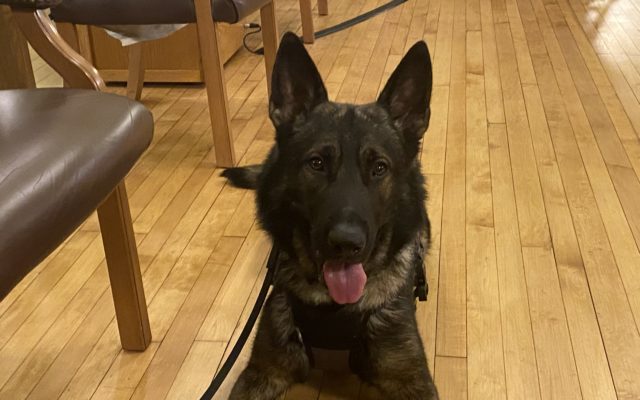 Bay City commissioners and meeting attendees had a chance this week to meet and welcome the city’s first K-9 officer to the public safety department.

Loki, a 2 year old German shepherd, was trained by Magnum K-9 and has been prepared for scent work; which Patrol Captain John Harned could include narcotic searches, tracking, and article searches… but preferably not suspect apprehension.

Corporal Paul Cairnes, Loki’s handler, says he has been training with him for approximately a month but only began to start living with him in the past two weeks.

When asked about possible suspect apprehension, Harned said Loki has been exposed to bite-work but not bite-training to focus on his primary objective.

He adds funds to obtain Loki, as well as a handler training fee with Magnum K-9, were donated to the department- saving several thousands of dollars.

The  public safety department plans to work with the Saginaw Valley K-9 association for future fundraising efforts for related costs.

It is expected that Cairnes and Loki will be certified and officially on road patrol by the end of November.