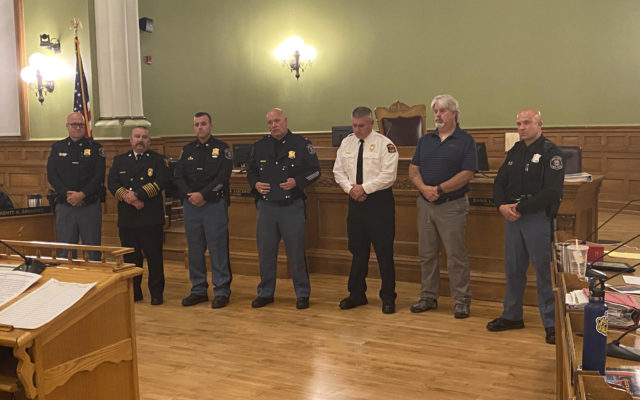 After a long 2020 and even longer 2021, Firefighters and Law Enforcement with the Bay City Department of Public Safety were recognized for their hard work (Photo- Ric Antonio; WSGW)

With 2021 in its final quarter; Law enforcement officers and Firefighters from the Bay City Department of Public Safety were recognized by City Commissioners for their hard work in 2020.

Public Safety Department Director Mike Cecchini says while the coronavirus shut down last year’s recognition ceremony, it didn’t slow down the work done by any of the city’s Officers or Firefighters.

Captain Nathan Webster, who received 2020’s Officer of the year award, says gathering to recognize merits and life saving efforts often is often shrugged off by coworkers as just part of their job, but adds it’s nice to see attention brought to important members of the department.

Director Cecchini says the recognition is long overdue, and each of individual reciving honors deserves it after a year where everyone’s efforts had increased significantly- ranging from local crime and fire prevention despite pre-vaccine virus concerns, to assisting with historic Flooding in Midland.

Here’s the full list of personnel recognized by the Citation board for 2020: