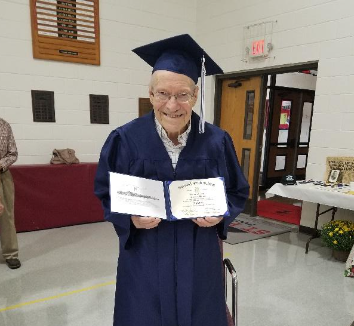 Frank Emeott never graduated high school since he was needed at home on the family farm when he was growing up. At his 100th birthday celebration on Saturday, he was presented with his high school diploma after a life of learning and working in the Hemlock community.

Hemlock Public Schools Superintendent Doctor Donald Killingbeck presented Emeott with his diploma, stating, “Frank exemplifies the Huskie spirit and passion of a lifelong learner and a focus on being a productive contributing member to our community and society as a whole, and this is a well-earned honor.”

Emeott served in the Air Force in World War 2 before returning and marrying Arlene (Tessin). They have three children, all of whom graduated from colleges and universities.

“This is such an honor,” Emeott said, “I am so grateful, finally, after 100 years, I have my high school diploma!”