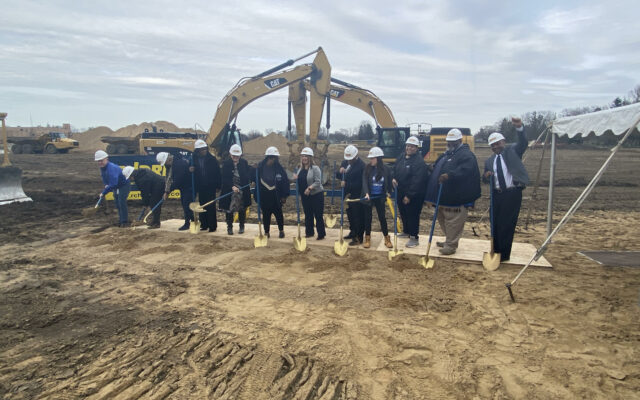 The Saginaw Public Schools Board of Education Gathers to break ground on the already-in-progress construction of Handley Elementary (Photo- Ric Antonio; WSGW)

After breaking ground on the upcoming Saginaw United High School at the end of last month, work has already begun on the foundation of the new Handley Elementary school.

The construction marks the school’s 4th site of operation.

Handley was originally built at the corner of Court and Congress in 1929 before being torn down in 2006 to make room for Thompson Middle School.

For two years after that, the Elementary school operated out of the former North Middle School on Bond street.

Afterwards students and staff transitioned to Handley’s current location, the former South Middle School on North Elm, when those students were relocated to Thompson.

Facility Services Director, Tim Furtaw, says with an already established build timeline, a lot of material has been organized for use on the 60,000 sqft construction.

When all is said and done, the new site will house 16 interactive classrooms,  new art and music studios, a state-of-the-art S.T.E.A.M. lab, and a custom gymnasium that has an attached performance stage and can convert into a performing arts auditorium.

With everything already planned in terms of educational facilities handled by the adults; Handley Principle Julie Miller has begun to survey younger students- asking what they’d like to see included in the new school’s playground.

Shortly after the groundbreaking; the School board approved measures to begin work on upgrading the heating and cooling systems of every building district wide- other than at the current Arthur Hill and S.A.S.A. sites, which will be taken care of using funds from the new Saginaw United High school bonds.

Construction on the new Handley building is expected to be done by the start of the 2024 school year.