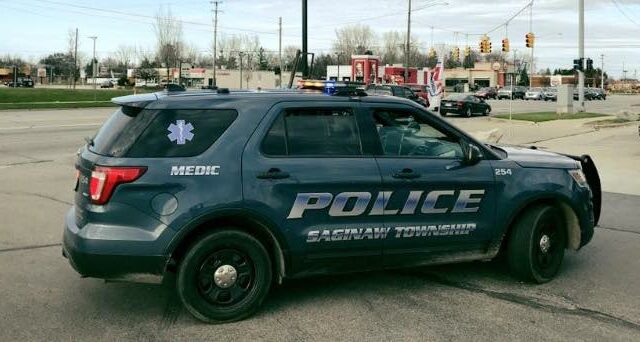 Just after 11:30 Friday night, Saginaw Township Police attempted a traffic stop on a vehicle as it entered on to the northbound entrance ramp to I-675 from Tittabawassee Rd.  The vehicle was followed by two Saginaw Township police vehicles with emergency lights and sirens activated.  The vehicle did not stop and continued north on I-675 until coming to the entrance ramp to southbound I-75.  The vehicle continued on to I-75 southbound, went over the Zilwaukee Bridge and then near the entrance ramp leading on to I-75 from M13, the vehicle came to an abrupt stop and made a U-turn in front of the pursuing police vehicles.  To avoid a side impact with the vehicle, one of the police vehicles turned into the concrete median barrier and crashed.  The suspect vehicle then went the wrong way on the entrance ramp towards M13, at which time two suspects fled from the vehicle and were later taken into custody with the assistance of surrounding agencies and MSP air support.  The two suspects included a man driving and a woman passenger who were lodged at the county jail.  Police Chief Scott Malace says the Saginaw Township Police Officer involved in the crash had minor injuries, sought medical treatment at a local hospital and was later released.  This incident is still under investigation.