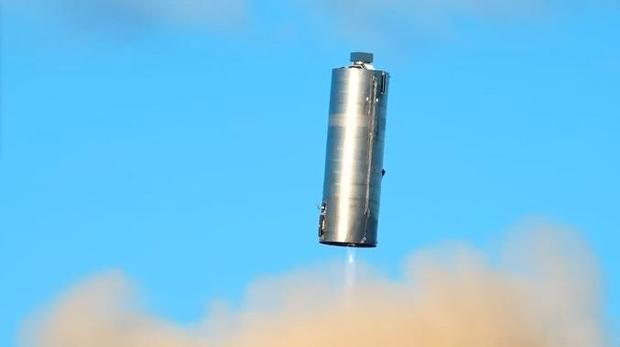 After repeated delays for a variety of technical issues, SpaceX successfully launched a methane-powered prototype of its planned high-power Starship rocket on Tuesday. The company sent a dummy stage aloft from its south Texas test facility for a brief up-and-down hop to a nearby landing pad.

The test flight came just two days after a SpaceX Crew Dragon spacecraft brought two NASA astronauts safely back to Earth with a Gulf of Mexico splashdown after a near-flawless test flight expected to clear the way for operational missions later this year.

Resembling a giant metal grain silo, the Starship test rocket’s single Raptor engine — powered by liquid oxygen and high-energy methane propellant — ignited at 7:57 p.m. ET, boosting the vehicle into the sky above Boca Chica, Texas, atop a plume of flaming exhaust and billowing clouds of smoke.

The planned maximum altitude was 150 meters (about 490 feet), but it was not immediately known how high the prototype actually flew.

Streamed by LabPadre SpaceX enthusiasts near the remote coastal launch site, the rocket’s exhaust plume could be seen moving back and forth as its flight computer steered the vehicle to one side of the launch stand, setting up an apparently smooth landing on a nearby pad.

When the smoke cleared, the vehicle appeared none the worse for wear, a major milestone for SpaceX and the Starship rocket system the California company is designing for eventual missions to the moon and, eventually, Mars.

The red planet was clearly on SpaceX founder Elon Musk’s mind after the rocket successfully landed.

“Mars is looking real,” Musk tweeted to a follower. “Progress is accelerating.”

The planned 394-foot-tall rocket is made up of two stages, a huge reusable booster known as the “Super Heavy” and a fully reusable upper stage, known as “Starship,” that sports fins like classic sci-fi rockets. The vehicle is intended to carry heavy-weight cargoes, propellant to refuel other spacecraft or passengers, whether astronauts, non-government researchers or space tourists.

The prototype launched Tuesday, known only as “serial number 5, or SN 5, was a full-scale version of a Starship stage’s propellant tanks with a single Raptor engine. The eventual Starship stage will be 160 feet long and powered by six Raptor engines, generating a combined 1.6 million pounds of thrust.