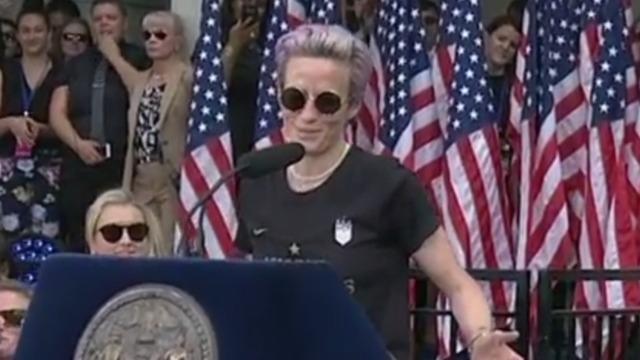 What will it take to get Megan Rapinoe to the White House? Certainly not a World Cup win. She’s already had two of those but after this year’s victory refused to visit Donald Trump with her championship team. It will take much more for Rapinoe to go to the White House.

Rapinoe said she did not think about going to the White House unless she’s being “inaugurated.”

When the president saw that interview, he tweeted about Rapinoe. “I am a big fan of the American Team and Women’s Soccer, but Megan should WIN first before she TALKS! Finish the job!” Mr. Trump tweeted in part.

“[We haven’t yet] invited Megan or the team, but I am now inviting the TEAM, win or lose. Megan should never disrespect our Country, the White House or our Flag, especially since so much has been done for her & the team. Be proud of the Flag that you wear. The USA is doing GREAT!” he continued in another tweet.

“I don’t follow him. And I went on Twitter and looked at it and I was like, ‘This is crazy. I mean, what is going on? This is so insane.’ And we’re like, ‘We’re going to win. So this is not going to age well,'” she said with a laugh.

Her team did ultimately go on to win the World Cup. The scrutiny from the president only made the team more unified, Rapinoe said. “Everyone was like, ‘You’re a G, Rapinoe!’ Like, ‘Get him!’ From the back of the bus,” she remembered.

Rapinoe also opened up about her brother, Brian, who previously discussed watching his sister’s World Cup win from an inmate facility. Rapinoe said her brother was “swept up” into the prison system and, though he struggles with addiction, is a “wonderful” person.

Rapione said she comes from a big, loving “kooky” family, who was concerned about her viral clash with Mr. Trump. She added that her political displays — talking about unity and and kneeling in solidarity with Colin Kaepernick — have opened up a dialogue within her “generally pretty conservative family.”

“I think it’s actually been really amazing because it’s forced us all to have really hard conversations,” Rapinoe said. “I mean, the kneeling thing was like, oh God, the family was just shook by the kneeling.”

However, being able to talk to her family about her protest “was just an incredible silver lining of all of the negativity,” she said.