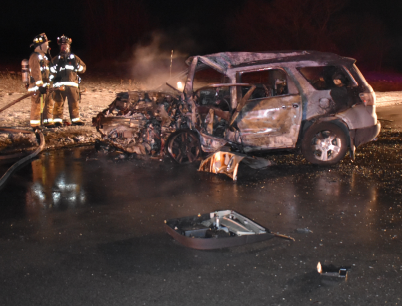 Around 7:30pm Saturday, February 26th, Deputies of the Saginaw County Sheriff’s Office were dispatched to the area of Tittabawassee Rd. west of N. Center Rd in Kochville Township to assist with  a head-on injury crash.

On arrival Police found a blue Jeep involved the crash alongside a Silver GMC Acadia which had caught on fire.

One Sheriff’s Deputy attempted to make contact with the driver of the Acadia, 51-year-old Ruben Maldonado from Saginaw, who was still unconscious as fire stemming from the crash began to spread- preventing his removal.

Another Deputy attempted to retrieve a fire extinguisher from his patrol vehicle, but by the time he returned the flames had grown too intense for any efficacy.

MMR tried to administer medical assistance, but he declared dead at the scene.

Maldonado’s two young children were also in the vehicle at the time of the crash, ages 9 and 6, but had been removed by bystanders at the scene.

The driver of the other vehicle, a 50 year old woman from Midland, was pinned in and had to be extracted.

She was transported to Covenant by ambulance, was later airlifted to Hurley Medical center in Flint, and is listed in critical-but-stable condition.

Maldonado’s two children were transported to Covenant Healthcare- the 6 year old boy is currently in the ICU but is listed as stable, the 9 year old girl was treated and released.

The incident is still under investigation.