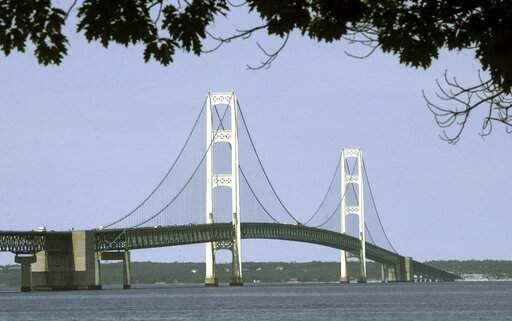 FILE - This July 19, 2002, file photo, shows the Mackinac Bridge that spans the Straits of Mackinac from Mackinaw City, Mich. Oil transport company Enbridge says Wednesday, a gap has opened between a section of its Line 5 pipeline and the lake bottom in Michigan's Straits of Mackinac. Erosion has washed away sediments beneath the pipeline, opening a gap that exceeds the 75-foot limit set under a state easement. The company says it's awaiting government permits to install screw anchors for additional support in that spot and others along the underwater line. (AP Photo/Carlos Osorio, File)

Last fall as part of the budget process, Governor Whitmer vetoed $37.5 million in funding for the Pure Michigan advertising campaign which is aimed at increasing travel and tourism in Michigan.

Governor Whitmer says she has always suppported Pure Michigan and recently proposed at least $15 million in state funding. But, she believe the tourism industry needs to help with more funding.

Strategic Marketing and Research Insights of Indianapolis say Pure Michigan ads returned $9.28 in state tax revenue for every $1 spent outside the state in 2018. The Mackinac Center for Public Policy conducted a study in 2016 and found that every dollar Michigan spent on tourism promotion created only 2 cents of value for the state’s hotel industry.

By the way, Governor Whitmer’s funding proposal is not for this year, but fiscal year 2021. There are some lawmakers trying to restore immediate funding.