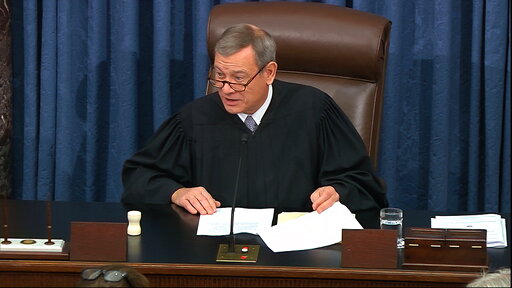 In this image from video, presiding officer Chief Justice of the United States John Roberts speaks as closing arguments in the impeachment trial against President Donald Trump begin in the Senate at the U.S. Capitol in Washington, Monday, Feb. 3, 2020. (Senate Television via AP)

With the impeachment of President Trump official and the Senate trial wrapped up, there are now nine months until election day.

The Democrats still have candidates battling for the nomination while President Trump is running his reelection camptaign.

How much will impeachment be used by the Democrats or President Trump when trying to secure votes to win the White House? Has impeachment changed your vote or solidified your vote?