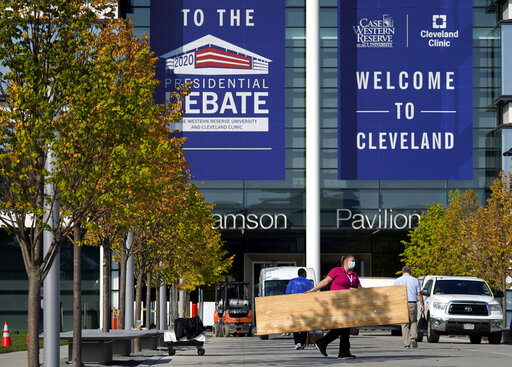 A woman carries a table while setting up outside of the Health Education Campus of Case Western Reserve University ahead of the first presidential debate between Republican candidate President Donald Trump and Democratic candidate former Vice President Joe Biden, Sunday, Sept. 27, 2020, in Cleveland. (AP Photo/Julio Cortez)

Live Coverage starts at 9pm on 100.5 and 790 NewsRadio WSGW and OnLine at WSGW.COM

WSGW will provide Live Coverage of the next Debates:

Plus, Live Coverage of the Vice-Presidential Debate, Wednesday, October 7

Charlie and Dave and Pat and YOU:     We already know what is going to happen as part of the debate tonight (runs 8:48)…..

UNDATED (AP) – Mariah Carey is dropping an album and a book.
The book is a memoir, “The Meaning of Mariah Carey”, and comes out tomorrow.
As a companion to the book, Carey is also releasing a new album called “The Rarities.”    It features songs that have been recorded since her debut album in 1990.   The album contains previously unreleased songs and rare B-sides, including some from some
of her too-selling albums.