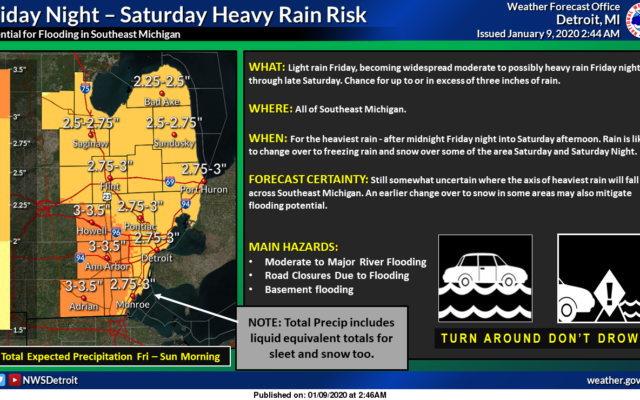 Precipitation in various forms over the next several days, including Rain, Snow, and a Mix

Here is the National Weather Service Information as of 2:45am Thursday Morning 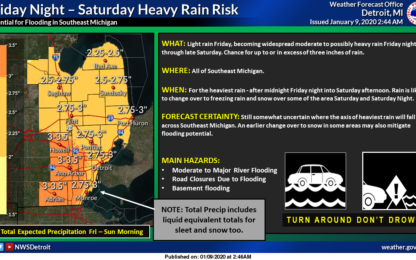 An extended period of rain from Friday through Saturday may produce widespread rain amounts of around 3 inches with some locally higher amounts.

This includes Saginaw, Bay, Midland, The Thumb, and SouthEast Michigan

A period of northeast gales are expected Saturday and Saturday night.   With wind gusts on the lake possibly over 40 MPH and the high water levels, rising water
levels and wave action may cause significant shoreline flooding.   Low lying areas along Saginaw Bay will be particularly susceptible.

The flooding is also likely to extend up the Saginaw River into Bay City.

Every Thursday Morning after the 7:30 news, Charlie talks with Voice of Saginaw Spirit Hockey, Joey Battaino, and a special guest, Jeremy Rick, Executive Director of the Bay Area Women’s Center, to talk about the Saturday game and “Love Shouldn’t Hurt Night”   (runs 11:20)…..

Charlie and Dave and Pat and YOU:     A wrap-up of a very successful season of “Pat’s Perfect Pigskin Prognostications” (runs 6:23)…..

Family Grows by FOUR in One Year…..

WEST PALM BEACH, Florida (AP) – A Florida mom says doctors told her she had a better chance of winning the lottery than of giving birth to two sets of twins in the same year.

Alexzandria Wolliston says she feels like she hit the jackpot with the births of Mark and Malakhi in March and Kaleb and Kaylen in
late December.   The West Palm Beach woman also has a 3-year-old daughter at home.

She said she recently learned that both of her grandmothers lost twin boys at birth, which makes her believe her four babies are a blessing from above.