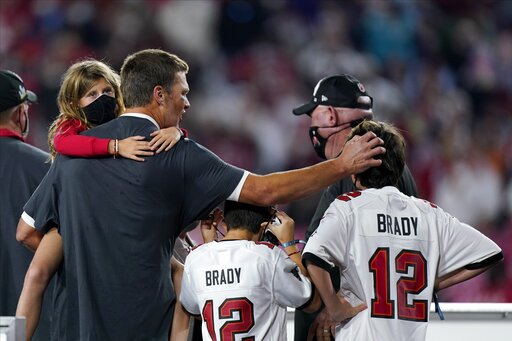 Charlie and Dave and Pat and YOU:     The Super Bowl LV game, plus references to the National Anthem, America the Beautiful, and Halftime (runs 9:14)…..

From your Morning Team Predictions, Charlie Rood was the only member of the team to choose Tampa Bay

Man is in Guiness World Records as Oldest to Water Ski

An earbud warning for you, though you have to wonder how this happened…..

BOSTON (AP) – Think it’s cool to listen to music through earbuds while you sleep?   A Massachusetts man’s experience suggests you should think again.

Brad Gauthier of Worcester ended up swallowing one of his earbuds while asleep.   Gauthier says he went to sleep a week ago listening to music and woke up the following day to shovel snow.   But when he took a sip of water after that chore, he found he couldn’t get the liquid down.   He also found he was missing an earbud.    His son suggested he might have swallowed the missing bud and a visit to an emergency clinic proved that theory correct.   An X-ray found the earbud stuck in the man’s esophagus.

Gautier says he only had minor discomfort but warns against wearing earbuds to bed.