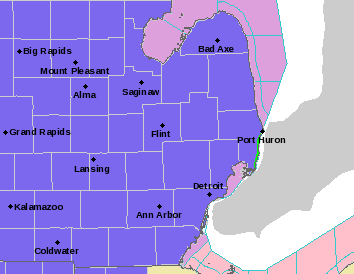 From WSGW and Weatherology, The National Weather Service, and AccuWeather:    Weather Advisories Start Later This Afternoon

Advisories are generally vertical, North to South, with higher amounts along the Lake Michigan shoreline, and the lesser amounts on the East side shorline

For Our Great Lakes Bay Region, through Friday morning, potentially up to 4″ of snow/mixed precipitation, with gusty winds

For the tier of counties including Gratiot, Clare, Isabella, Clinton, Roscommon, Crawford, through Friday evening, potentially up to 5-6″, gusty winds

For the Lake Michigan shoreline counties, through Friday evening, potentially up to 8″, gusty winds

Charlie and Dave and Pat and Art and YOU:     “Pat’s Perfect Pigskin Playoff Prognostications” leads to Super Bowl Predictions (runs 5:28)…..

Charlie and Dave and Pat and Art and YOU:     Taylor Swift sued by a theme park regarding her “Evermore” album (runs 2:21)…..

Deadline to Enter for Your Chance to Win $10,000 is This Friday, February 5

Wake Up Song of the Day:     Gladys Knight and The Pips “Midnight Train to Georgia“.   An honor song for the death of songwriter, Jim Weatherly.   A former star college quarterback who pursued a music career instead of the NFL, he wrote this song and others for Gladys Knight, plus for Garth Brooks, Neil Diamond, Kenny Rogers, Glen Campbell, and more.