It’s a WSGW Thursday Morning Team Show with Charlie and Dave and Pat and YOU…..

This Morning between 6-8am, Art Lewis joins You with the Saginaw Spirit at Tim Hortons on Tittabawassee Road in Saginaw 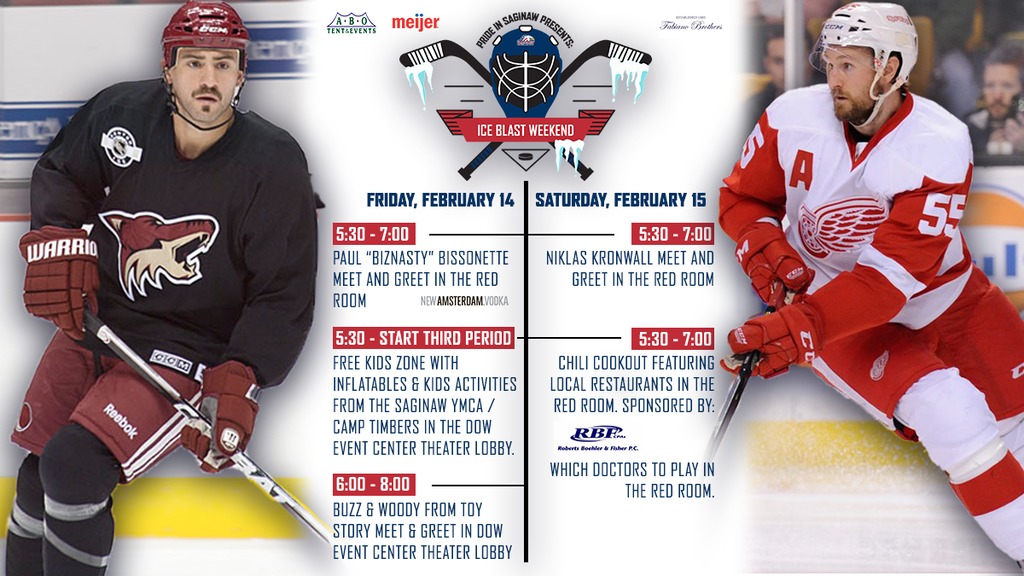 The Saginaw Spirit are proud to announce feature events for Pride in Saginaw Presents:   Ice Blast Weekend February 14th and 15th at The Dow Event Center

The native of Welland, Ontario began his OHL career with the North Bay Centennials and moved with the team to Saginaw in 2002. Bissonnette racked up 13 goals and 36 assists in his time with the Spirit from 2002-05, making him the 70th ranked scorer in team history.

While with the Spirit, Bissonnette was selected in the fourth round, 121st overall by the Pittsburgh Penguins in the 2003 NHL Draft. Biz went on to play 202 NHL games for the Pittsburgh Penguins and the Phoenix Coyotes. In 2015, Bissonnette won the Calder Cup Championship with the Manchester Monarchs, former AHL affiliate of the Los Angeles Kings.

In addition to his broadcasting duties with the Coyotes, Bissonnette is also a co-host of the popular Barstool podcast, “Spittin’ Chiclets”.

Also in the Red Room for guests 21 years or older, will be free samples of Pink Whitney, the Pink Lemonade flavored vodka from New Amsterdam® Vodka.

In addition to having Bissonnette in the Red Room, other Ice Blast Weekend Friday festivities include a free kid’s zone with inflatables and activities from Saginaw YMCA / Camp Timbers in the Dow Event Center Theatre Lobby from 5:30 p.m. through the beginning of the third period. Buzz and Woody from the movie Toy Story will be in the Theatre Lobby from 6:00 – 8:00 p.m. for a meet and greet.

The Saginaw Spirit will hope to secure the fifth edition of the Coors Light I-75 Divide Cup that evening, taking on the Flint Firebirds at 7:05 p.m. The Spirit holds a 4-2 lead in the season series.

Kronwall played 15 seasons for the winged wheel, finishing fourth all-time in scoring among Red Wings defenseman (432). Only Nicklas Lidstrom, Reed Larson, and Red Kelly scored more points in their Wings careers than the Stockholm, Sweden native, who was a part of the 2008 Stanley Cup Championship team.

During that 2008 Stanley Cup run, Kronwall led the NHL Playoffs in assists, points, and plus/minus by defenseman.

Kronwall is now an advisor to the general manger with the Detroit Red Wings organization.

For tickets and more information on Ice Blast Weekend, visit www.saginawspirit.com or call the Saginaw Spirit Store at (989) 497-7747.

Congratulations to all Participants

“French Toast Frenzie” presented by WSGW and the Listen to the Mrs. Podcast, The Maytag Store, and Pioneer Sugar

It was yesterday, February 12

Thanks to Our Loyal Family of Listeners for Joining Us

Here is a Brand New RocketGrab Launch for YOU!!!!!

$12 gift certificate to Baldwin’s Smokehouse Barbeque for only $6!

YOU STILL HAVE TIME TO PLAY, BUT DON’T DELAY…..

NOW until February 21, Register Your Name at the Forward Location on M-84, Westside Saginaw Road, just of I-75