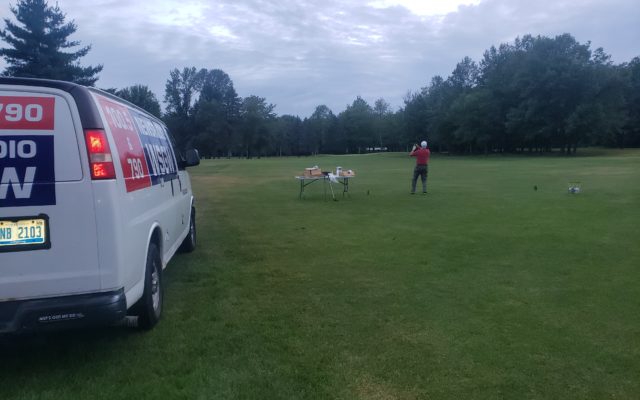 Today, it was the the First of Three “Closest to the Pin” contests to Win your Invitation for a foursome to the WSGW “WinVitational Golf Outing” on September 15 at The Pohlcat in Mt. Pleasant, presented by West Side Decorating Center.

Plus, winner wins a foursome to the WSGW Four Person Scramble at The Sawmill Golf Club.

Golfers joined us from 6:30-9am at Maple Leaf Golf Course in Linwood

Congratulations to 2nd and 3rd Place Winners of a Round of Golf at Tree Tops Resort in Gaylord:

Click here for complete details on the next two “Closest to the Pin” contests:

WSGW WinVitational at The Pohlcat presented by West Side Decorating Center

Art Lewis talks to a member of the family that owns Maple Leaf Golf Course (runs 1:16)…..

Olympic Champion Swimmer, Katie Ledecky, in a “Got Milk?” promotion, swims the length of a pool with a glass of chocolate milk on her head and doesn’t spill a drop!

LOS ANGELES (AP) – Taylor Swift has become the first artist to debut at number one on both the Billboard Hot 100 chart and the albums chart in the same week.
All 16 songs from Swift’s “folklore” album made Billboard’s Hot 100 singles chart, with “Cardigan” at number one.   She has set a record as the woman with the most simultaneous Hot 100 debuts, with 16.   The previous record-holder was Swift, when 14 songs from “Lover” debuted on the singles chart in September.
The act with the most simultaneous debuts are Drake and Lil Wayne, who have 22 each.
“Folklore” is Swift’s seventh number-one album.

Wake Up Song of the Day:     Molly Hatchet “Flirtin’ with Disaster“.    Founding member Steve Holland died on Sunday at age 66.