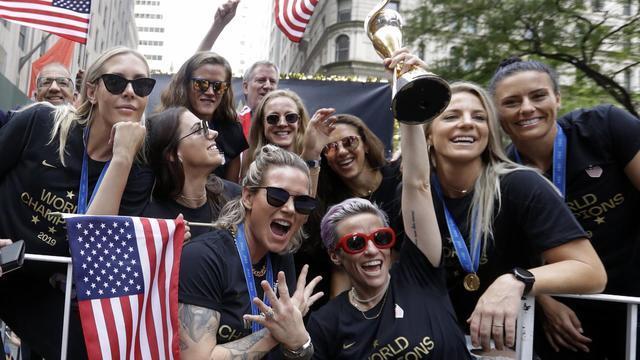 After attending the 2019 ESPY Awards in Los Angeles Wednesday, U.S. Women’s soccer midfielder Allie Long returned to her hotel room to discover it had been burglarized. Her wedding ring, cash, and the symbolic key to New York City presented to her by Mayor Bill de Blasio just hours earlier were all missing.

Long has been celebrating all week following the United States Women’s National Team’s win against the Netherlands to take home their fourth World Cup trophy.

At the ESPYs, the team was presented with the “Best Team” award. Earlier that day, they had each been presented with keys to New York City during the ticker-tape parade down the “Canyon of Heroes.”

“After the @ESPYS show someone stole my wedding ring, cash and the key to my favorite city after just receiving it from my hotel room,” Long tweeted Thursday night. “Do you make copies @NYCMayor? I would love a new one.”

The Los Angeles Police Department responded to a burglary call from the Ritz Carlton hotel on Thursday around 2:30 p.m., a spokesperson told CBS News. The investigation revealed that on Wednesday around 9 p.m., Long and her husband “left the door to their hotel room slightly ajar.” They both returned to the room around 10 p.m., and the following morning discovered that several of Long’s belongings were missing. The investigation is ongoing.

Mayor de Blasio responded to Long Friday morning on Twitter. “So sorry to hear it, Allie,” he tweeted. “Hang in there. Don’t worry about the key. Like any good New Yorker, we keep a spare for our neighbors! We got you covered.”

Long appears to be in good spirits following the incident. She posted a photo to Instagram with her husband captioned, “Take my ring but not my mans (or medal Thank God).”