WNBA star A'ja Wilson on giving back to the next generation 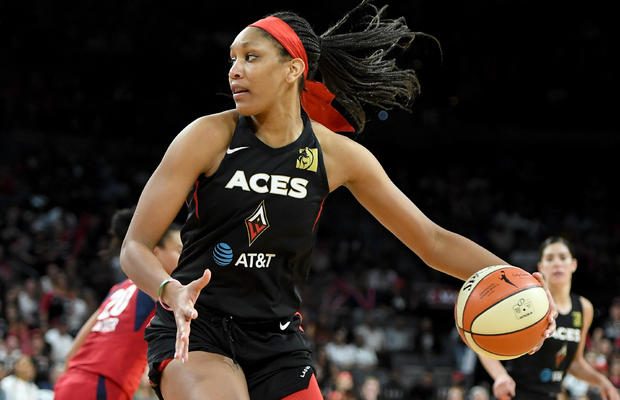 ▶ Watch Video: WNBA star A’ja Wilson on speaking her truth and giving back to the next generation

Few athletes have accomplished as much as A’ja Wilson — especially at such a young age. The 24-year-old Hopkins, South Carolina-native took home the WNBA’s Most Valuable Player Award last year and recently earned another type of hardware: her own statue at her alma mater, the University of South Carolina, where she led her team to a National Championship in 2017.

But Wilson admits her road to success wasn’t without struggle and dedication. In a wide-ranging interview with CBSN’s Antjuan Seawright, Wilson spoke about battling depression, using her platform to help others, and her advice for young athletes hoping to walk in her shoes.

To see our league make it to 25 years, it’s truly a blessing. Even though I’ve only been in it for about three, going on four years. It’s just crazy to see how much it’s grown. A lot of people don’t really understand how young we really are.

And the progress that we’ve made. Yes, we have a lot of work to do but when you’re standing on the shoulders of the Lisa Leslies, Sheryl Swoopes, Dawn Staleys, Lauren Jacksons… you have to stand up for what you believe in because they’ve paved the way for my generation to now be here for the 25th anniversary.

It really does mean a lot to be a part of it, especially now when everything’s moving and gelling and we’re growing. I’m just so happy to be a part of it. We still have a lotta work to do and I’m not gonna let up because we hit a big milestone.

On her struggle with dyslexia

When it comes to my story with dyslexia, it was a tough one for me to really speak out about — because, you know, being an athlete, people see the accolades. People see you in the uniform but they don’t really understand you’re still human at the end of the day.

I’ve battled with it probably longer than I’ve probably known of it. I really didn’t pay any attention to it. I was going through it in high school and my parents just thought I was a lazy teenager that just didn’t study. I knew I put too much work in for me not to get the results that I deserved.

It wasn’t in, like, a cocky way. But it was, like, “Come on now. Like, I’m doin’ my work. Where are the results that I want?” That’s when my parents got me tested in high school. I went to Heathwood and they got me resources.

I had to take a lot of just tests and I was enjoying it ’cause I got outta class. But at the end of the day, I was still pushing towards a bigger story that’s bigger than me and it’s tough. I battle with it still to this day.

I’m still grateful to have people like Coach Staley in my life that made me read the scripture before shootaround. That made me get outta my comfort zone of reading in public. And it’s kinda helped me — a lot. I’m just forever grateful to have people that were, you know, so into not just basketball A’ja and helping me grow and helping me build — and become a woman that I am today. It’s tough but I love that my foundation is here to continue to help raise money to help families and children get the resources that I had.

And being vocal about her mental health

Mental health is always somethin’ that’s really tough to talk about. But I’m glad that, you know, athletes that are on a platform can share our stories in a way to show people that we’re all going through it. The biggest thing how I deal with it is just understanding that I have to feel the feelings.

If I’m not feeling good that day, it’s okay to not feel good that day. I think I got caught up in trying to face and be that person that each fan or each person wanted me to be, and that’s just physically impossible. But I just thought that I could do it.

Once I kinda got past that — that I can’t please everybody and always — someone’s gonna always have something to say, I just realized that I really just need to feel the feelings. I need to be who I am through and through. And if you don’t like it, whatever.

The importance of her statue at South Carolina

It means the world when you know that the next generation can really go up to that statue and see what a young Black girl did at her school and then also in her community.

I could’ve went to who knows where? But at the end of the day, I stayed at home because I knew that it could be something that’s bigger than me. I wanted to play for a woman that looked like me, that did everything that I wanted to do.

For me to accomplish as much as I have at the University of South Carolina, it probably wouldn’t have even been into play if I didn’t have those people like my parents and my group planting those seeds for me to succeed. So when it comes to that statue, I know it’s so much bigger than the basketball accolades.

That’s what really makes my heart so happy because when I see people taking those selfies and tweeting at me, I still will be, like, “Oh my God, there’s a whole statue of me.” It’s still surreal to me — I can’t even believe it.

It’s truly special … she’s an AKA. Of course, we’re in the White House. But when I look at it, it really just puts a smile on my face and wanting me to throw my pinkies up and say my “Skee-wee,” because, you know, it’s just representation matters.

It just shows how Black women are just so powerful in what they do. When we stand up behind one another and for each other, like, anything can happen. I was tearing up just watching it all happen ’cause it didn’t seem real.

How she handles adversity

I work best pretty much under adversity because that’s how we got a national championship. We got hit with so much adversity that day. I mean, Alaina Coates went down. Everything was just, like, a mess.

No one imagined us even making it that far and we still pushed through. So adversity, I love it. It really helps me figure out who I am… When it comes to being a human in my regular old life, when it comes to a loss — I just feel it.

If I grieve when I lost my grandmother, I went through every statement of not playing basketball, putting it aside, figuring out what I want to do in life… I just gotta be real with myself.

I speak my truth through and through when it comes to losses in my life…  I realize what’s really important. I prioritize a lot of different things and that’s kinda how it goes into adversity — I really gotta prioritize my life.

Where should I give my energy to? Does this deserve my energy? If not, I gotta cut it off. I can’t be with the disconnected because that just throws me off balance. And that’s how I take it. If that means losing some people, then it is what it is. But the biggest gain is finding myself.