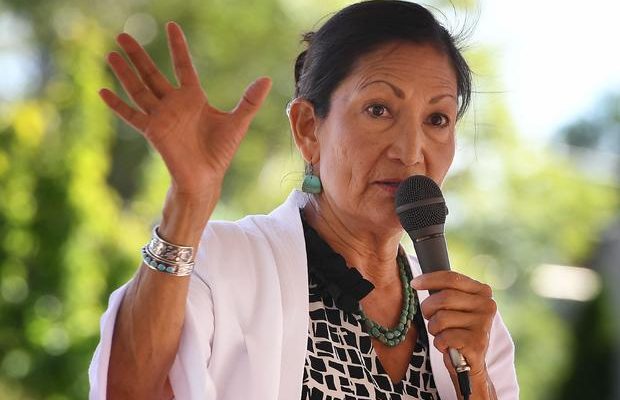 On Monday evening, Debra Haaland, a 35th-generation New Mexican from the Pueblo of Laguna, became the first Native American ever to be confirmed as a Cabinet secretary.

When she testified in February at her confirmation hearing, Haaland began her opening remarks by introducing herself to senators in her tribal language of Keresan.

“This historic nature of my confirmation is not lost on me, but I will say it’s not about me. Rather, I hope this nomination would be an inspiration for Americans moving forward together as one nation and creating opportunities for all of us,” Haaland said.

Before she was elected to Congress in 2018, Haaland served as the tribal administrator for the San Felipe Pueblo for almost two years and then chaired New Mexico’s state Democratic Party. In the same year, she and Kansas’ Sharice Davids became the first Native American women to serve in Congress. She made history again when President Biden nominated her to lead the Interior Department.

“If an Indigenous woman from humble beginnings can be confirmed as secretary of the Interior, our country holds promise for everyone,” Haaland said.

That feeling of promise is shared by other Indigenous people who spoke with CBS News about the significance of Haaland’s confirmation.

“I just think about my son and how he’s going to be able to visibly see someone who looks like him, someone who comes from his same community, who is at that level,” said Valerie Siow, an educator and Laguna Pueblo Native. “Sometimes I can’t even believe it.”

“Never in my wildest dreams” did Siow think she’d one day witness a Cabinet secretary speaking her language. Her 9-year-old son attends a Native American charter school in Albuquerque, where he is learning the Laguna Keres dialect. The introduction Haaland gave is similar to the one Siow is teaching her son, a practice meant to pay respect to one’s ancestors.

“That’s who you are,” she told her son. “You represent yourself to people in that way.”

Language is meaningful to the Pueblo people, says the former director of the Native American Studies program at the University of New Mexico, Dr. Gregory Cajete, a Tewa Indian from Santa Clara Pueblo. And so is land.

The Laguna Pueblo, west of Albuquerque, is over half a million acres and home to more than 4,000 people. The Pueblo have maintained their culture, traditions and language in large part because they have never been entirely uprooted from their homeland.

“That makes us a little different than a lot of other tribes in the United States,” Cajete explained.

Haaland pointed out during her confirmation hearing that the land occupied by the U.S. Capitol was the ancestral homeland of the Nacotchtank, Anacostan and Piscataway people — a Native custom.

The Pueblos’ devotion to their culture has not shielded them from the tragedies Native Americans have suffered over the centuries. This, according to Cajete, is precisely what makes Haaland’s confirmation as interior secretary, a position in which she’ll oversee federal lands and the Bureau of Indian Affairs, so poignant.

“Many of the issues of tribes with the United States — and earlier, at least in the Pueblos, with the Mexican government, and earlier with the Spanish colonial government — have been around land. And because we are a land-based people, our spirituality, our sense of who we are, our identity, and our livelihood is directly tied to the land and has been for centuries,” he said.

“That is one of the reasons why Indigenous peoples fight tenaciously for their land rights because of the innate understanding that culture and a sense of homeland is essential to the continuation of the tribe or tribal tradition,” he added.

“A lot of people don’t really understand the relationship that Indigenous people to this country have had with the federal government. There’s a whole history of broken treaties, of land for forced removal of our people,” she said.

“It’s kind of hard to explain outside of Indigenous circles but our way of life is so connected to [the land],” she said. “The land always calls us home.”

Haaland’s confirmation, Cajete believes, “gives her the power to be able to right some very deep wrongs to Native tribes.”

Along with the acreage itself come concerns about stewardship, about air, land and water quality.

Both Siow and Cajete noted that the Pueblo once housed one of the world’s largest open uranium mines. It employed much of the reservation’s population, moving Native Americans away from traditional farming and ranching jobs while stimulating the Pueblo economy. But the mine exacted a terrible cost: it polluted reservation waters and lands, rendering areas unviable, and destroyed the health of those who worked there.

Haaland’s background endows her with a certain “empathy” on the job, especially as it relates to conservation and combating the climate crisis.

Haaland spoke to that philosophy during her confirmation hearing, recounting the first word Navajo Code Talkers transmitted to one another: Ne-he-mah, meaning “our mother,” the word they used to mean America.

“This is all of our country. This is our mother. You’ve heard the earth referred to [as] ‘Mother Earth.’ It’s difficult to not feel obligated to protect this land and I feel that every Indigenous person in this country understands that,” she said.