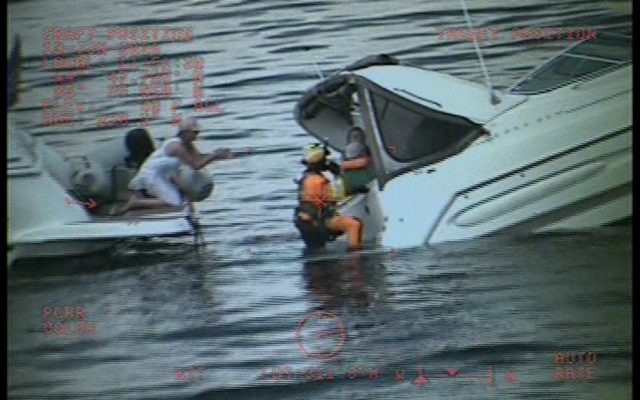 At approximately 2:30 p.m., Sector Sault Sainte Marie Command Center received a distress radio call from a 30-foot vessel that was taking on water. The Coast Guard launched a 45-foot response boat – medium crew and diverted an Air Station Traverse City MH-60 Jayhawk helicopter crew to the scene. The crew got on scene within 20 minutes and deployed their rescue swimmer to transfer everyone to a Good Samaritan vessel that had arrived to assist.

While conducting the transfer, the boat began to sink rapidly, forcing everyone into the water. The rescue swimmer was able to rescue 10 people with the help of the Good Samaritan, who transported them to shore. The vessel completely sank in about 250-feet of water.

There are no signs of pollution. The vessel has a maximum potential of 75 gallons of gasoline onboard.

“As the boating season begins, it is important to ensure your vessel is ready to safely get underway,” said Commander Amy Florentino, Deputy Sector Commander. “Conduct a check of your boat, make sure you have the proper safety gear including life jackets, and ensure you have an operable VHF radio. In this case, the mariner was able to use a VHF radio to communicate to us that they needed help, which allowed the Coast Guard and other boaters to get on scene quickly.”