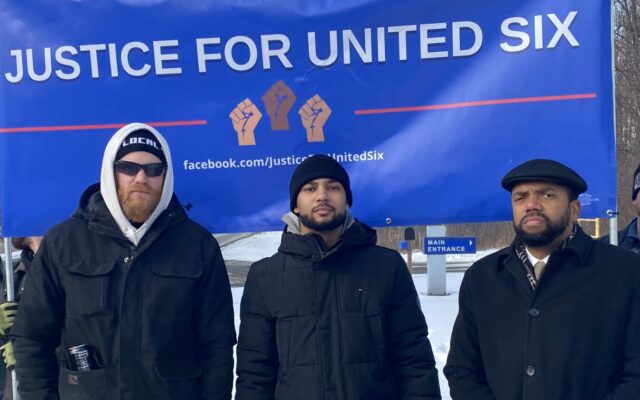 Nearly a hundred people showed to support Justice For United Six, a group made up of former employees of United Electric Contractors who say they faced racial slurs and poor treatment compared to white co-workers daily.

United Electric is run by ABC of Michigan, and those gathering outside the Midland branch called for the resignation of ABC President Jimmy Greene.

Attorney Richard Mack Jr., who is representing the United Six in a lawsuit against ABC, says Greene not only ignored racist acts but encouraged them by non-union employees.

The group filed a federal lawsuit on January 20th for obscene racism and discrimination, alleging a number of United Electrical supervisors and employees routinely called workers of color racist names, and made racially charged comments and threats.

They allege UEC had fired Richardson and Shank, as well as Apprentice Gabriel Tavera (a Mexican-American), and Apprentices Marius Richardson and Eric Burch, and Foreman Vance Murray (all Black) after the raising concerns.

In response to the protest and lawsuit, Greene says the matter is only a smear campaign after the company was awarded a recent contract over the local IBEW.

Greene says, as a Black man himself, he is vehemently against racism in the workplace, and that the clip the protest group is citing as his ‘endorsement of racism’ is taken out of context- being part of a larger presentation in support of employee rights and Racial & LGBTQ diversity.