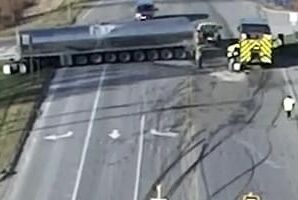 Overhead shot of the crash site at the intersection of M-24 and M-46 (Photo: Tuscola County Sheriff's Department Facebook)

Tuscola County Sheriff’s deputies responded to an crash at the intersection of M-24 and M-46 in Indianfields Township around 7am Wednesday that left one man dead.

A 47 year-old Ubly man was traveling westbound on M-46 operating a tanker hauling 12,000lb (or just shy of 1400 gallons) of milk when he failed to stop at the traffic signal and hit a southbound M-24 driver.

Investigators say that southbound driver, a 63-year-old man from Unionville, was not wearing his seat belt and was ejected from his pickup truck- dying on impact.

Police have not yet released names of the tanker driver or the victim, as the incident remains under investigation.

The Tuscola County Sheriff’s office says it will provide updates to the incident through social media.