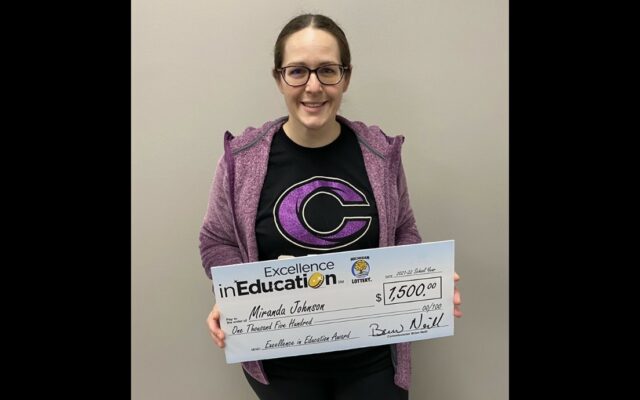 A Tuscola County educator known for being a role model to her students has received an Excellence in Education award from the Michigan Lottery. Miranda Johnson is a teacher at Caro Alternative High School, part of Caro Community Schools.

Johnson said her desire to help others propelled her to a career in education. She has been an educator for 11 years, the last five in her current position.

“For as long as I can remember, I have had a desire to help others. When I was in high school, I volunteered as a camp counselor, and I learned that I had a passion for working with young people. Since I graduated from an alternative high school, it was a no-brainer that I work with that population when the opportunity presented itself. We see a lot of students that have been knocked down for too long in their academic careers and they are defeated. They just need someone to believe in them again and give them the opportunity they deserve to learn and earn their diploma.”

A former student nominated Johnson for the award, citing her ability to set a positive example for her students.

“Mrs. Johnson has been the best role model and example for all students. Alternative high school has been portrayed in such a negative light but due to my teacher’s dedication, we see it not as a last chance but a new opportunity. Without her, we would not get the education we deserve, she believes in us more than anyone in this world has. She gives her own money and time to make us happy and healthy. We have deodorant, sanitary products, chap stick, food, coffee, and more that she provides for her students from her own pocket. She gives us the world even when she’s at her lowest, and I can’t express how thankful my family and I are for her kind soul. She deserves the world, and if I could give it to her I would. She’s the change I wish to see in this world and inspires me to do the best I can every day.”

The Michigan Lottery established the Excellence in Education awards in 2014 to recognize outstanding public-school educators. Winners of the weekly award receive a plaque, a $1,500 cash prize, and a $500 grant to their classroom, school, or school district. One of the weekly winners will be selected as the Educator of the Year and will receive a $10,000 cash prize.