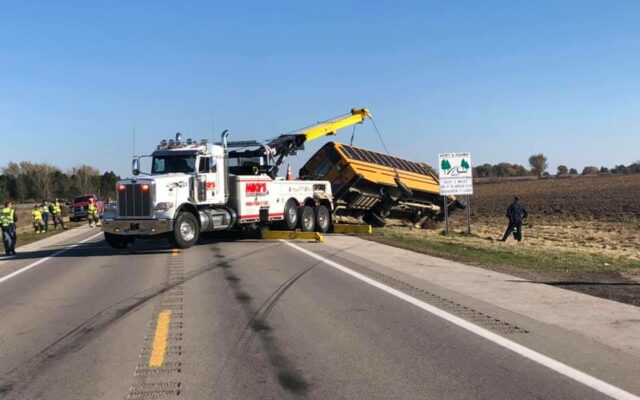 The school bus crash in Tuscola County on Monday, November 8 injured 21 students and the bus driver.

The bus, taking 31 Akron-Fairgrove students to the Tuscola Technology Center in Caro, was heading east on Biebel Rd. near Colling Rd. in Almer Township just before noon when a 38-year-old Fairgrove woman driving a 2015 Chevy Trax, who initially stopped at the intersection, proceeded forward and struck the bus. The bus sustained a broken axle, left the road and overturned in a ditch.

First responders say all the students were following proper seating rules. The injured students were taken to local hospitals with only minor cuts, bumps and bruises. The bus driver, a 35-year-old Reese woman, was also taken to a hospital with non life threatening injuries. The driver of the car did not seek medical treatment.

Police were assisted by the Caro Police Department and Caro Fire Department, MMR and ACW Ambulance.