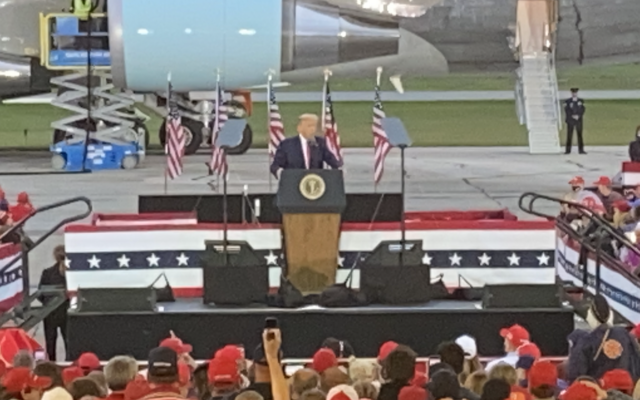 President Donald Trump’s visit to MBS International Airport in Freeland had plenty of fanfare, but once Air Force One landed the crowd became even more electrified.

Moolenaar spoke on the federal assistance being granted to the state for new work on the Soo Locks and for the communities along the Tittabwassee river that faced record-level flooding after the failure of the Edenville and Sanford dams.

James, A Farmington Hills businessman and retired U.S. Army helicopter pilot aiming to unseat Democratic Senator Gary Peters, after falling short of ousting Senator Debbie Stabenow in 2018; talked about Peters meeting attendance, six-figure salary, and how he understands many of the issues facing the African American community in today’s climate.

When the time came for the President to take the podium he discussed many topics ranging from rival Joe Biden’s job creation record and aptitude for the Presidency after 47 years in government; to criticizing Governor Gretchen Whitmer, Michigan’s ongoing COVID-19 restrictions, and a lack of Big Ten football .

Some notes that audibly resonated with the attendees as the night went on included support for the great lakes bay region after this May’s dam failures, and new work on the Soo Locks near lake Superior.

He talked on cooperation with Congress to approve an initial $75 million in the upcoming budget, and a proposed additional $123.3 million to modernize and improve the locks.

On the topic of the flooding, he spoke about the major disaster declaration signed to allow $43 million in federal relief aid, and supported the idea of litigation against Boyce Hydro, owner of both the Dams that failed on May 19th.

Trump thanked several Michigan politicians in the audience, and went into a support speech offering his “total and complete endorsement” for John James- citing his military experience and opponent Peters’ shortfalls.

COVID-19 talks continued with a promise of a vaccine “Very Soon” and the durability of the American economy during the pandemic even while slowed.