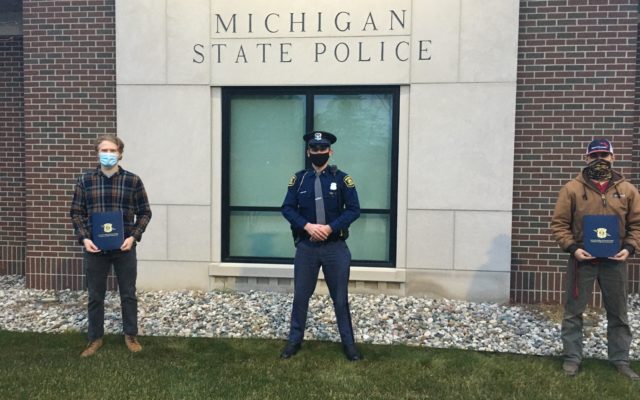 The Michigan State Police (MSP) say Tpr. Christopher Kustra has been awarded the Lifesaving Award for saving the life of another. Three civilians also contributed to this life saving and were awarded with Distinguished Citizen awards along with a Beaverton Twp. firefighter who will receive a Professional Excellence award.

On May 28, 2020, Trooper Kustra responded to a call where a person suffered electrical shock and was unresponsive. Upon arrival, Trooper Kustra could see that CPR was being performed on the unresponsive man by three civilians, Samuel Hine, Allen McNier and Jacob Gomola. CPR was taken over by firefighter Dean Mathews while Tpr. Kustra confirmed the man was not breathing and did not have a pulse. Trooper Kustra deployed his AED and administered an electric shock. The unresponsive man’s heart started, and he began breathing on his own. The subject was transported to a local hospital. Due to the quick actions of Trooper Kustra, Mr. Hine, Mr. McNier, Mr. Gomola and Mr. Mathews, a life was saved.

On Tuesday, December 22, Tpr. Kustra was able to provide awards to Mr. Gomola and Mr. Hine in person at the Tri-City Post.  The other awards will be presented later.