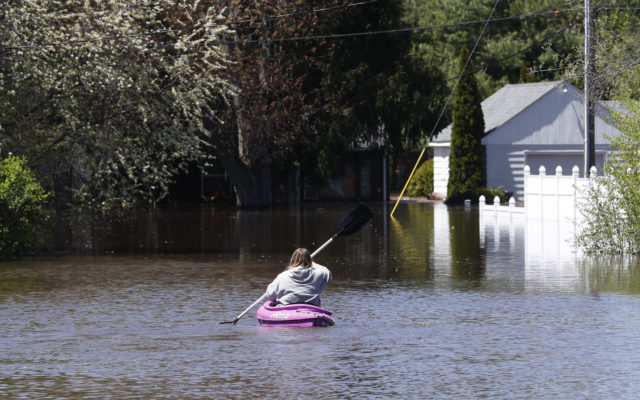 A kayaker paddles out to check on a residence as the Tittabawassee River overflows, Wednesday, May 20, 2020, in Midland, Mich. (AP Photo/Carlos Osorio)

Midland County Central Dispatch reported that the Tittabawassee River crested at 35.05 feet at about 5:00 p.m., Wednesday, several  hours earlier than expected. A flood warning continues through Sunday, however, until the water begins receding. The previous record for the river is 33.9 feet, set during the flood of 1986.

Rising water caused by the failure of the Edenville and Sanford dams on the Tittabawassee River forced the evacuation of some 11,000 people in Midland County and surrounding areas, including Arenac, Gladwin, Iosco, Ogemaw and Saginaw counties. Power outages were scattered throughout the region.

Gov. Gretchen Whitmer toured the devastation by air and visited with evacuated residents at Midland High School Wednesday. She said the state will seek legal recourse against the operators of the Edenville and Sanford dams, which have been cited by federal regulators for safety design issues in the past.

Midland City Manager Brad Kaye said the Grace A. Dow Memorial Library was flooded, just three years after a 2017 flood caused about $1 million in damage. He said extensive repairs would again be needed there. He said there were some problems with the sanitary sewer system, but no issues with the water system as of Wednesday afternoon.

Meanwhile, Saginaw County’s Emergency Management Division announced Wednesday afternoon that they were evacuating residents along St. Andrews Road/W. Michigan Ave. between Gratiot and Center Roads, due to rising water levels. Saginaw Township Center Courts was being re-activated as a shelter to replace Freeland High School, which was being closed due to under utilization.

The Dow Chemical Company in Midland has enacted the company’s flood preparedness plan., which includes the safe shutdown of operating units on the site. Only essential Dow staff needed to monitor the situation and manage any issues as a result of the flooding remain at the location. Dow officials said they continue to engage with site tenants and Midland County officials and take immediate action to ensure the safety and security of our employees, community and the environment.

Northwood University has completely evacuated and closed its Midland campus. The university said no one will be permitted on campus for any reason as a safety measure. However, online classes that were already underway prior to the flooding will continue.

The Michigan Department of Transportation has developed an interactive map listing all road closures related to flooding impacting the region, primarily in Gladwin, Midland and Saginaw counties. The geographic information system map includes closures for state trunklines and local roads. MDOT said 20 state trunkline and local agency bridges have been impacted by flooding and will require extensive inspections prior to reopening.