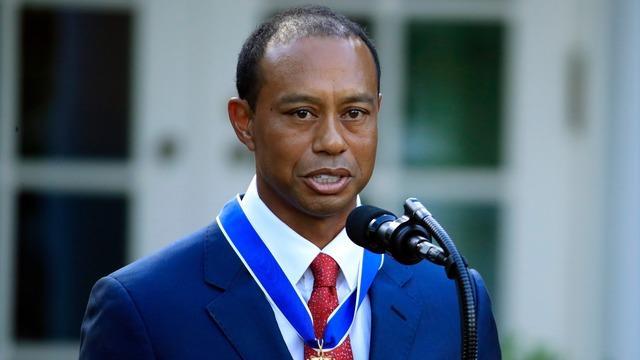 President Trump honored Tiger Woods for his momentous golf career by awarding him the Presidential Medal of Freedom, the nation’s highest civilian honor, at the White House on Monday.

“The age of Tiger gave us moments that will live forever in sporting lore,” the president said, standing alongside the golf legend.

Mr. Trump detailed Woods’ painful journey, including his fall from the top golfer in the world to among the lowest. The president, reading mostly from a teleprompter but also going off script, as he often does, recounted Woods’ many triumphs and failures in the last decade. Woods “fought through the terrible pain” from his many injuries, and began to reclaim his place, Mr. Trump said.

Woods said his last Masters victory was the highlight of his career, and made a point to thank his mom and tell her he loves her. Woods’ family came on stage for pictures.

The president, who live-tweeted the Masters, had already congratulated the golf pro by phone.

“Spoke to @TigerWoods to congratulate him on the great victory he had in yesterday’s @TheMasters, & to inform him that because of his incredible Success & Comeback in Sports (Golf) and, more importantly, LIFE, I will be presenting him with the PRESIDENTIAL MEDAL OF FREEDOM!” Mr. Trump tweeted last month.

Mr. Trump has called Woods a “truly great champion.” Mr. Trump has golfed with Woods in the past, and has tweeted about him for years. He’s also praised Woods for offering a diplomatic answer last year in response to a question about Mr. Trump’s relationship with the NFL and NBA. Woods has won the Masters five times.

“Tiger Woods showed great class in the way he answered the question about the Office of the Presidency and me. Now they say the so-called “left” is angry at him,” Mr. Trump tweeted in September 2018. “So sad, but the ‘center & right’ loves Tiger, Kanye, George Foreman, Jim Brown & so many other greats, even more…”