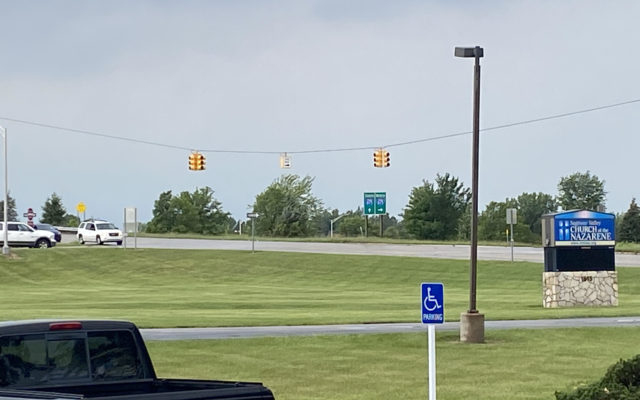 Traffic lights and signs out at Tittabawassee near I-675 in Carrollton township after severe thunder storms knocked out power in th area Saturday (Photo- Ric Antonio; WSGW)

Saginaw county 911 put out a Tornado warning 4:51pm, and rain from the storm flooded roadways like Holland ave near Cumberland- where a number of vehicles were left disabled due to water gathering in a low area in the road.

While no tornado has yet been confirmed to have formed; As of 6pm Saturday Consumers reports 1,212 customers between Carrollton, Zilwaukee, & Kochville townships and 472 along M-13 between Curtis rd and birch run lost power.

In Bay City, Wilder rd near Euclid & Henry was closed just before 5:30pm due to flooding (near the railroad tracks and speedway gas station).

According to Detroit Edison, 200 are without power in northeastern Huron county near grindstone city, just east of Port Austin which is still recovering from a tornado ef-3 touchdown earlier this summer.

Genesee county as of 6:30 has confirmed Two tornado touchdowns around Schwartz creek and Flushing

Around 6:46pm, while rains have calmed in the area; Southbound I-75 near mile marker 155 (North of the Zilwaukee bridge, but south of the I-675/I-75 Interchange) was shut down due to water over the roadway.