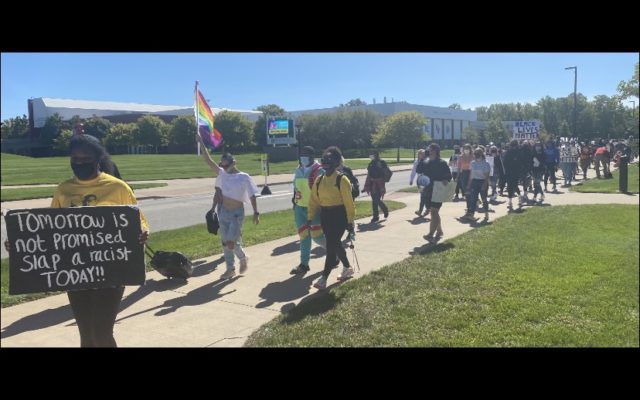 Students gathered to protest after a speaker made homophobic and racist comments on campus last Thursday.

Organizers of the protest say the speaker was  set up in a high traffic area of the university, did not wear any facial covering, and was harassing and threatening to spit on individuals who had issue with him being there.

Protesters seeking accountability marched from the Ryder athletic center to the belltower courtyard, making demands for university president Don Bachand to denounce the comments made by the speaker.

They also asked for him to release a statement supporting Black Lives Matter, to help form a mandatory microaggression and unconscious-bias training program for students, and for a statement from University police explaining their lack of intervention in last week’s incident.

President Bachand issued a statement and sent an email last week to the SVSU community stating the visitor engaged in unplanned and unauthorized spontaneous demonstration and that they were not affiliated with the university and will not be allowed back on campus grounds.