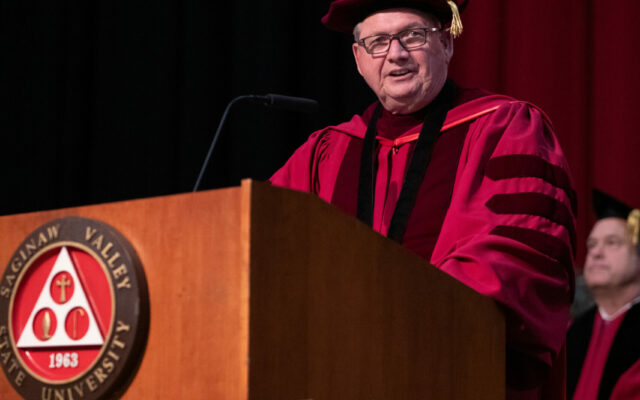 Saginaw Valley State University President Don Bachand has announced his intent to retire from SVSU in December of 2022, concluding more than 40 years of service to the university.

“When I started here in 1978 as one of the founding professors for the criminal justice program, it was because I wanted to teach, mentor and inspire young people,” Bachand said. “I have continued to find motivation to serve our students each and every day, even as my roles have changed.”

Bachand became SVSU’s fourth president in 2014, building upon several prior roles within the university. Arriving as a faculty member, Bachand enjoyed a distinguished teaching career, winning SVSU’s Landee Award for Teaching Excellence in 1987. He moved into academic administration in 1996 as dean of the College of Arts and Behavioral Sciences. Bachand served in that role for nearly 10 years before being named vice president for academic affairs in 2006 and adding the responsibilities of provost in 2010.

Vicki Rupp, chair of the SVSU Board of Control, expressed appreciation for Bachand’s dedication throughout his presidency, and especially for his leadership during the challenges posed by the COVID-19 pandemic.

“He stepped up immediately and demonstrated exceptional leadership, putting together a wonderful team to navigate incredibly complex and rapidly changing conditions,” Rupp said. “The Board and I are proud that SVSU has successfully maintained university operations while prioritizing very high levels of health and safety on campus. The university also responded to public health needs in our community by hosting numerous COVID-19 vaccination events, administering nearly 50,000 doses.”

In February of 2020, SVSU dedicated a 38,500-square-foot building addition that is home to the Scott L. Carmona College of Business. SVSU raised more than $15 million in private gifts and received nearly $10 million in capital outlay funding from the State of Michigan for the $25.4 million project.

“As an alumna of SVSU and a retired Dow executive, I am acutely aware of the critical role SVSU plays in preparing business professionals for our region and our state,” Rupp said. “The fundraising campaign was a terrific success, and the outstanding facility will benefit SVSU and our community for generations to come. SVSU’s role in building the talent pipeline for our region and our state never has been more important than it is today.”

Drawing upon his experience as a first-generation college student, Bachand secured private funding to ease the financial burden on students and families. The number of private scholarships awarded to students has more than doubled, from 729 in the 2013-14 academic year to more than 1,700 this year. In April of this year, SVSU also announced the receipt of the largest single gift in university history, $6 million from the Thompson Family Foundation to support scholarships for students from working families. During Bachand’s presidency, the value of SVSU’s endowment has grown from $76 million to $111 million.

Upon becoming president, Bachand emphasized the need to increase retention and graduation rates for SVSU students. The university’s retention rate rose from 70% in 2014 to 77.4% in 2020. To continue this progress, SVSU is one of only eight institutions in the nation selected in 2019 to participate in the Higher Learning Commission’s Student Success Academy.

SVSU introduced several new academic programs during Bachand’s presidency in areas of rising community needs and job market demand, including a Master of Social Work program in 2017, bachelor’s and master’s degree programs for public health, and a bachelor’s degree in rehabilitation medicine in 2018. SVSU created a post-graduate certificate program for psychiatric mental health nurse practitioners in 2019; the program already has received more than $5 million in federal grants to prepare nurse practitioners to respond to substance use disorders and mental health needs in underserved communities. These programs have grown rapidly and combined have more than 300 students enrolled.

Bachand expanded SVSU’s international relationships, opening a campus of Ming Chuan University, based in Taiwan, on SVSU’s main campus in 2014. At the time, it was the only collaboration in Michigan where an Asian university had a physical campus in the state; Ming Chuan continues to operate programs in SVSU’s Gilbertson Hall. In addition, Bachand and his wife Liana supported construction of the Royal Seed Home clinic in Ghana, West Africa, that opened in December 2020. Nursing students and faculty in SVSU’s College of Health & Human Services will have opportunities for study abroad experiences in global health at the clinic in the coming years.

In 2015, SVSU earned the distinction of receiving the Community Engagement Classification from the Carnegie Foundation for the Advancement of Teaching, marking SVSU as a university that is exceptionally engaged with the communities it serves. Less than 10 percent of U.S. colleges and universities have achieved this designation.

“We have seen the impact of our students and alumni in businesses and organizations across our region for many years, but our community’s pandemic response really shined a spotlight on so many of them,” Bachand said. “Every day, it seemed, we would hear the story of a doctor or nurse, a teacher or police officer, an engineer or social worker who were answering the call to serve others.”

SVSU also has been nationally recognized for its commitment to employees, military-affiliated students and others. SVSU was the only public university in Michigan to be named a Great College to Work For in 2019, 2020, and 2021; it has earned the honor for six consecutive years. The university also has been recognized as a “Best for Vets” college by Military Times for seven consecutive years.

“I am proud of the work we have done on behalf of our students, our faculty and staff, our alumni, and our community,” Bachand said. “The awards and honors are welcome affirmations of what we have achieved together, but I value the personal evaluations too. I know our students are receiving an education that will prepare them for meaningful lives and rewarding careers; I hear it from my niece and nephew who are currently attending. I look forward to celebrating with our graduates again this fall.

“My proudest moments at SVSU, as a professor or as president, have been seeing students complete their degrees and graduate. I attended college while working for the Detroit Police Department. I have never forgotten the opportunities my degree afforded me, and what that moment meant for me and my family. I have enjoyed sharing that moment with thousands of SVSU alumni families over the years.”

“As a Board, we value Don’s ongoing leadership as he concludes an extraordinary career with the university,” Rupp said. “He has built many trusted relationships, and he has pledged to remain engaged with the university after he retires from the presidency. We deeply appreciate Don’s devotion to SVSU and we will be working hand in hand with him to ensure a smooth and successful transition.”