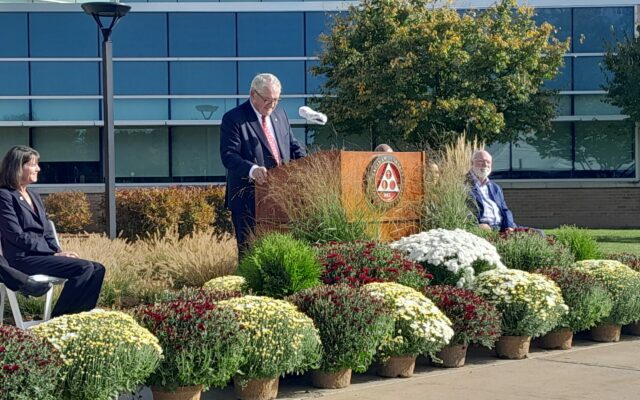 In June, the SVSU Board of Control approved renaming the Health and Human Services building as Bachand Hall. A former Detroit police officer, Bachand began working at the university in 1978 as a founding criminal justice professor, eventually becoming president of the institution in 2014. As a long-serving faculty member and administrator, Bachand emphasized a healthy and effective workplace, leading to SVSU receiving national recognition as a “Great College to Work For” for six consecutive years. He also increased private giving to support key initiatives. The number of private scholarships awarded to students more than doubled from 729 to more than 1,700 by 2021.

The 90,000 square foot facility houses the Crystal M. Lange College of Health and Human Services. On Monday, October 3, the renaming ceremony took place in front of the building with hundreds of people in attendance, including SVSU alum and current mayor of East Lansing Ron Bacon, alum and former CEO of Fathead LLC Patrick McInnis, plus local elected officials, business leaders and current and former SVSU students.

Bachand will retire at the end of December. He is succeeded by incoming president and Detroit native George Grant, Jr., who is currently the chancellor of Pennsylvania State University-Berks.