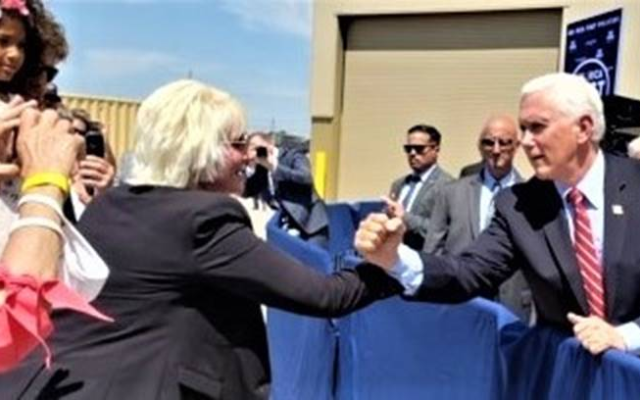 State Representative Annette Glenn, R-Midland,  put in a word for the area with Vice President Mike Pence while he was in Sterling Heights Thursday. Glenn said she hand-delivered to Vice President Mike Pence’s staff a copy of her letter urging President Trump to declare Midland County a federal disaster area and received assurance from Pence himself that a declaration is coming in a matter of days.

Glenn said she typically doesn’t attend visits to Michigan by the president and vice president “due to being so busy here at home or in Lansing with the responsibility of representing the people of Bay and Midland counties.”

“Today was different,” Glenn said. “I drove to Vice President Pence’s appearance in Sterling Heights and personally asked him for swift action. He very graciously assured me that he’s aware of the request, that it’s on President Trump’s desk, and said he expects it’ll be signed in the next couple days.”

“That was great news to hear for the thousands of families in our community who’ve suffered unimaginable loss and are desperately waiting for help,” Glenn said.

Glenn said her conversation with Pence topped off “a good week.” Wednesday, she won overwhelmingly bipartisan, near-unanimous support for her legislation appropriating $6 million in emergency flood relief funding for Midland County and surrounding areas, which passed the state House of Representatives 107-to-1.

She hosted a tele-town hall in which representatives of 211 services and the Red Cross explained flood relief assistance available to homeowners and businesses, in which over 3,000 area residents participated.

She also made calls to Billy Bourdow, owner of Billy’s Contracting, and Jon Lynch, CEO of Three Rivers Construction, who she said generously agreed with her request that they donate debris removal and reconstruction equipment and manpower to help clean up and rebuild the city of Sanford.

“Billy and the great people at Three Rivers, our 211 services, the Red Cross – they’re all examples of the generosity of heart the leaders and people of our community have for helping each other when any one of us is in need,” Glenn said. “If we all just keep working together, together we’ll rebuild our community, one day at a time, no matter how long it takes.”